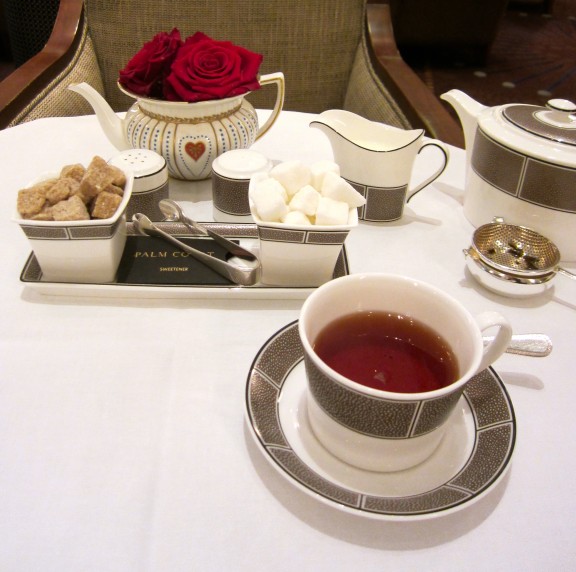 “There are few hours in life more agreeable than the hour dedicated to the ceremony known as afternoon tea.”
Henry James (1843-1916) American expatriate writer

When in London, one (well, I) absolutely must have afternoon tea.

The tradition of the English afternoon tea dates back to the 19th century, credited to the Duchess of Bedford, lady-in-waiting to Queen Victoria.  Apparently she needed an energy boost one afternoon (as the story goes, she had a “sinking feeling”), and asked her footman to deliver tea and bread and butter to her private room.

She found this new meal so satisfying and enjoyable that she began inviting her friends to join her for “afternoon tea.” The food part of the tea soon became more elaborate, with the selections of sandwiches, scones, cakes, and sweets that are familiar today.

The Langham Hotel was opened by the Prince of Wales in 1865, and they were the first hotel in the world to serve afternoon tea. They’ve been given the Award of Excellence (the Academy Award of the tea world) each and every year since 2010, by the UK Tea Council’s Tea Guild.

Tea is served in the hotel’s glamorous, lofty-ceilinged, elegant Palm Court, whose entrance is flanked by bejeweled iron gates.

A pianist entertains the high tea crowd with old romantic songs, including the 19th century music hall song, “Champagne Charlie.”  The song, and the serving of champagne by a performer as Champagne Charlie, is a Langham tradition, meant to celebrate the end of the busy business day and the beginning of the pleasure of the evening.

A lovely plate of cold canapés was served with the champagne: Cucumber and tomato on a small skewer, paper-thin beef wrapped around a slice of fig, and a tiny sphere of watermelon on a china spoon, paired with a delicate dollop of marinated mozzarella cheese, and topped with a sprinkle of micro greens.

Next, the tea sommelier arrived at the table to discuss my tea choice.

Teas are the creation of Alex Probyn, Master of Tea.  His reputably world famous teas include:

and The English Flower Blend (an herbal infusion of unique British flowers including chamomile, rose petals, elderflower and lavender – a heavenly aromatic blend.)

I went with the namesake Langham Blend.

The finger sandwiches were far from the white-bread-with-the-crust-cut-off standard fare:

-There were airy, French pastry gougères made with cream cheese and earthy truffles,

-His Royal Highness Castle of Mey beef sirloin, thinly-sliced and wrapped in a tortilla with tomato and lettuce, and topped with a rosette of horseradish cream,

-delicate lobster and cucumber salad flavored with fennel pollen on a diminutive bun,

-and a slice of baguette on which a mousse of Scottish salmon poached in pink champagne was sprinkled with glistening caviar.

No afternoon tea would be complete without scones served with Devonshire clotted cream and homemade strawberry preserves.

Finally, the “über selection of pastries and cakes,” as they are branded in the menu.  I’ll give them “über”for the imaginative selection created by Head Pastry Chef, Cherish Finden.

-The dainty, lighter-than-air, sponge cake was topped with a dome of “Royal Champagne jelly” and artsy, abstract embellishments.

-A “Kate Couture wedding dress cookie” (because I was there during the Royal Wedding – it was, of course, made before anyone knew what the dress actually looked like), decorated with swirly royal icing and a shiny silver dragée buckle. The cookie stood in a champagne glass layered with pastel-colored sugar.

-In the menu, the tiny pillar of dark chocolate ganache was called “Westminster Abbey chocolate.”  I can’t think of what the leopard print chocolate on the base and top would possibly have to do with the historical Abbey, but maybe they just named it for the location of the wedding.

Having tea in London is always a treat, but if you get that “sinking feeling” at around 4:00 in the afternoon, do like the Duchess did, and stop for a cup of tea and a snack.

There are Langham Hotels all over the world, but the one in London is at 1c Portland Place, Regent Street.

However, if you’re not able to have tea at the Langham, here are their “Afternoon Tea Etiquette Rules” reproduced verbatim from their website.

Afternoon tea do’s and dont’s (with my editorial comments – sorry, couldn’t stop my snarky American self):

The Langham’s Tea Director recommends a brewing time of 2 – 4 minutes dependent on the type of tea, and to use 1 tea bag or 1 rounded teaspoon of loose tea, for each cup to be served.

(Really?  One tea bag for one cup?  Hopefully that’s a no-brainer, folks.)

2.  Tea or milk, which is poured first into the cup?

Tea was poured first in the Victorian era, this was a test of the quality of the hostess’s bone china. Expensive china would not crack under the heat of the tea.  It also allows for the milk to be added at the perfect quantity to suit the drinkers taste.

(Some rebel along the way started pouring milk in first, because that’s how it’s usually served to me in England.)

3.  How do you hold the tea cup, and should the pinkie finger be raised or not?

Contrary to popular belief, the pinkie finger should not be extended but should rest by curving gently back towards your wrist.

4.  What is the correct way to stir the tea cup?

When stirring your tea, refrain from clinking the sides of your cup.

(I mean, really.  No reason to make noise while drinking tea.)

Under no circumstances dunk any item into your tea.  Dunking is a huge social faux-pas.

(That is, unless you’re in the privacy of your own home by yourself.  Then you can dunk all you want.)

When serving lemon with tea it is correct to use slices and not wedges.  It is best to provide a lemon fork to place a slice of lemon in the tea cup after the tea has been poured.  Never add milk to a cup of lemon tea.  The citric acid in the lemon will make the milk curdle.

(This is good information – I had no idea about the slice vs. wedge controversy, or the lemon fork.  I’m not actually sure what a lemon fork looks like – I should have paid better attention when I worked for Martha Stewart.  I do, however, have enough sense not to put milk in lemon tea.)

7.  Tea sandwiches, with or without the crusts?

Without.  The Duchess of Bedford, who was responsible for turning afternoon tea into a social occasion to fill the gaps between luncheon and dinner, was insistent that sandwiches should be served with crusts cut off.

(And I wouldn’t have it any other way.)