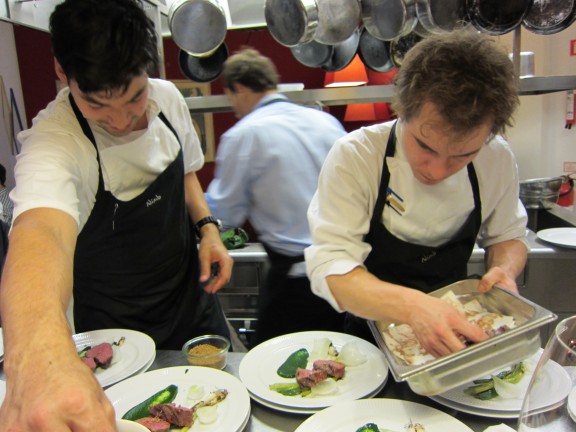 It was my first night in Copenhagen and I was feeling the effects of an overnight flight full of screaming babies. I knew I needed to stay awake to acclimate, and the only way to do that is to go out.

Within the grounds of Tivoli, the famous historical amusement park, is a fabulous (and I don’t use that word lightly) hotel called Nimb.

The exterior of the hotel looks like a Moroccan palace adorned with Christmas lights.

Inside there are several acclaimed restaurants. I chose the Brasserie, which was not only warm and welcoming, but downright raucous on that night.

I sat at a bar overlooking the sous chef station, which was a great vantage point for people-watching among the guests and the staff. The waiters looked like they’d been cast by a modeling agency.

The long tables were filled with lively diners, creating a contagious festive atmosphere. I always have my Kindle with me for solo dinners, but I found that it was much more entertaining to observe the Nimb scene.

Sipping my Carlsberg, I scanned the menu for simple comfort food.

I settled on a simple starter of roasted chanterelles on grilled bread, with fresh apple and woodruff. (Woodruff? It’s a flower, a.k.a. wild baby’s breath.)

Impressively, the dinnerware was Royal Copenhagen White Lace, and the cutlery Christopfle.

The minute I got home, I took my own Royal Copenhagen White Lace dinnerware out of storage and started using it every day. I love that!

I was enjoying my mushrooms on toast when two young sous chefs began to assemble ingredients at the station in front of me.

They were preparing to plate twenty eight beef tenderloin dinners for one table.

It was great entertainment – like watching a well-choreographed dance. The plates went into a lower oven to be warmed. The beef was sliced. Potatoes were heated and sauces stirred. Grilled scallions came from the kitchen laid out in neat rows on a tray.

I offered to help. They laughed.

I watched as the chefs methodically, but briskly, placed each element of the dish on the warmed plates. First, a squirt of spinach puree out of a pastry bag, gracefully smeared across the plate with the back of a spoon. Next, two grilled scallions were laid alongside the puree.

Sliced beef tenderloin was carefully placed on top of all, and sprinkled with mustard seeds. Finally, two different sauces were lightly drizzled over the beef.

Potatoes were piled into waiting hot cast iron skillets that were served family style at the table. The waiters, who had also pitched in with the plating, whooshed everything away to the waiting patrons.

While I enjoyed my dessert, the chefs swiftly cleaned up all evidence of their remarkable performance.

By the time I swallowed the last spoonful of my chocolate mousse, everything was sparkling clean and they were on to the next task.

And I was ready for bed.

Tags: Copenhagen, Denmark, restaurant, restaurants
admin
https://justonesuitcase.com
There are 2 comments for this article