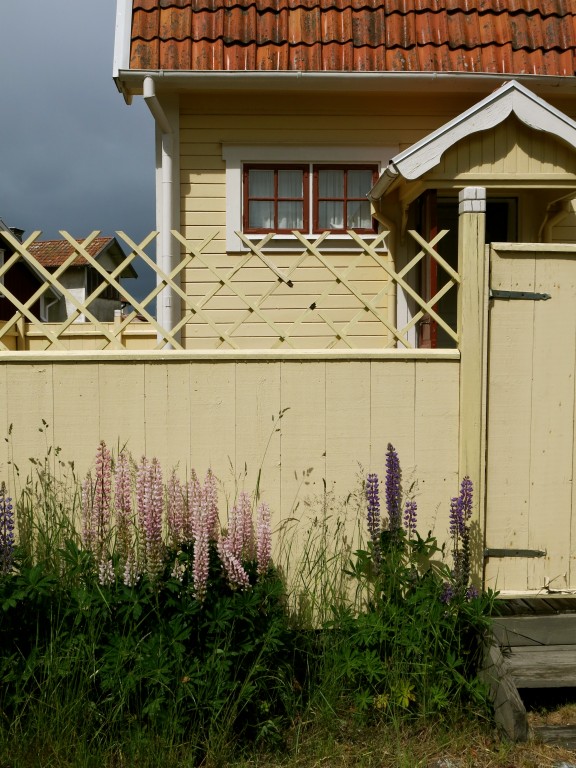 The village of Sandhamn is like one big quintessential Swedish style moment.

From the moment we docked at the harbor and I saw the beautiful blonde girls sitting on the dock, there was a photo op everywhere I turned.

The town of Sandhamn is located on the island of Sandön, literally “Sand Island,” the last bit of Sweden in the Baltic Sea before Finland and Estonia.

Since the late nineteenth century, the village has been known as a harbor for sailers and yachters, and a location for the summer holidays.  In fact, the population increases by the thousands in the summertime . . .  it’s like Sweden’s answer to Nantucket.

I wandered through narrow lanes that wound around charming houses.

Many Swedish country houses are painted red – “falu rödfärg.”  In the 16th century, the red pigment was derived from copper ore, and the tradition has continued.

Remnants of midsommer festivity were still evident: the greenery-adorned maypole and Swedish flags flying over the houses.

In full bloom, there was lavender lilac, lupine in heavenly shades of pink and periwinkle, and resplendent golden yellow wisteria.

One local café had a unique way of providing shade to outside tables, and another provided tufted cushions along a long bench outside.

At the edge of the village, I discovered a dramatic vantage point at the top of a rock.

And, just because it was that kind of day, I got to capture this enchanting moment – a mother and daughter surveying the breathtaking landscape of the archipelago.

Tags: sandhamm, Sweden
admin
https://justonesuitcase.com
There is 1 comment for this article