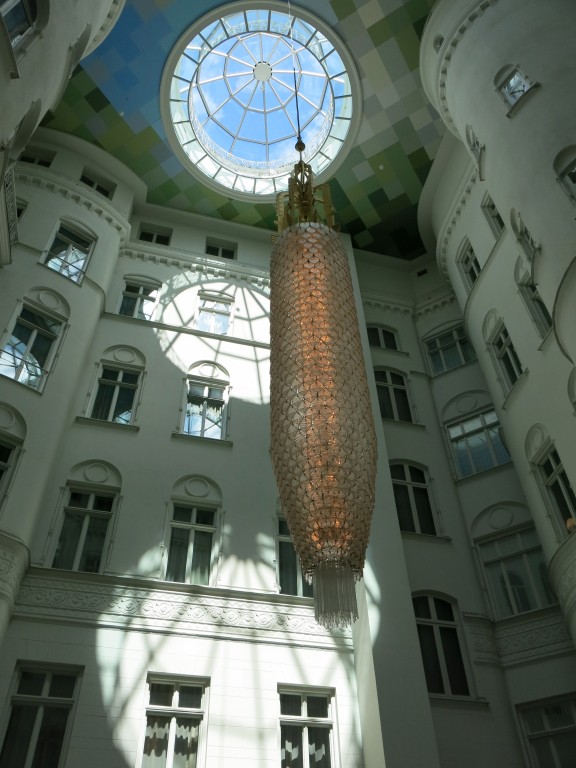 When I told people that my Significant Other and I would be staying in two different hotels in Stockholm, they would look at me inquisitively. (The fact that we are divorced but still together means that out-of-the-ordinary is generally expected, but nonetheless bewildering.)

I would explain that what I meant was, we would be staying together in two different hotels in Stockholm.

It’s what I like to do when I travel – not only to experience varied hotel styles, but also diverse neighborhoods in a city.

Our first accommodation was in the Nobis Hotel, located in the fashionable Normmalmstorg Square.

The Nobis opened in 2010, comprised of two connected buildings dating from the late 19th century.

A series of striking pendant lights fill the ceiling of the lobby.

The awe-inspiring, cathedral-like, lounge (also pictured at top) is a lofty space with a ceiling painted like pixels, and two glorious glass domes with windows to the sky.

The space is filled with groovy contemporary furnishings and artfully arranged accessories.

I loved the table-of-many-levels – form and function united.

Doors with leather-wrapped handles (the genius is in the details) lead to a series of public rooms, with guest rooms beyond.

These swirly-stiched leather chairs, and beautiful wooden tables with legs whose tops are visible on the surface, are used throughout.

Plant pots throughout the hotel are concealed with clever zippered canvas covers.

I’m always a fan of juxtaposing styles, but it’s a delicate balance. The minimal furnishings and contemporary lighting among the original architectural details of the Nobis building is an example of how it’s done well.

Even the lower-level breakfast room – a hotel space that is often bereft of interesting design elements – has dramatic lighting overhead.

The hotel’s infamous Gold Bar, named for its golden mirrored walls and ceiling, was our favorite place to hang out at the end of a long day of exploring.

In fact, we were so happy at the Nobis that I secretly had second thoughts about moving out of the city center to change hotels.

As it turned out, I couldn’t have been happier when we arrived at our new hotel on the island of Skeppsholmen.

Just wait ’till you see it.

Interesting side note about the Nobis Hotel location: The building once housed a bank that was the scene of an infamous bank robbery in 1973. Four employees of Kreditbanken were held hostage in the bank’s vault for six days, in which time they gained sympathy for, and loyalty to, their captor – giving birth to a psychological phenomenon that became known as the ‘Stockholm Syndrome.’

Tags: Stockholm_Sweden
admin
https://justonesuitcase.com
There are 2 comments for this article