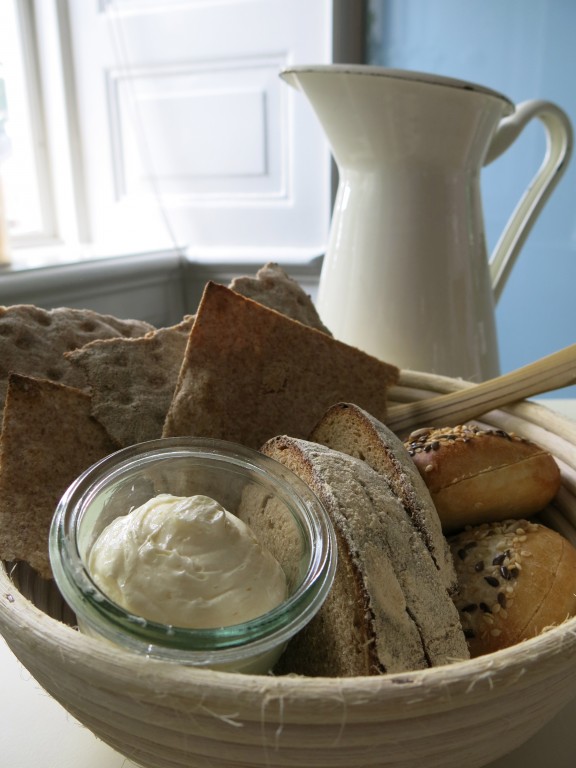 I like to eat as much as the next guy, but what really gets me excited is how the food looks.

The cuisine in the Långa Raden restaurant at Hotel Skeppsholmen was delicious – but the best part is that it was perfectly styled.

I mean, just look at that basket of bread and butter, with the enamelware water pitcher behind it.  Style moment perfection.  (I didn’t even have to move anything for the photo.)

I’ve described to you in a previous post how much I loved the interior design of the dining room.

The attention to detail did not stop at the furnishings – the food, and the way it was displayed, was just as exquisite.

The menu is simple and graphic, using that fabulous font that is on signage in the hotel.

The breakfast food presentation was masterful. (Truth be told, I probably spent more time taking photos than I did eating breakfast.)

(If you’re wondering what the sign in the center says: “We also have oatmeal with applesauce and goat’s milk.”)

Condiments for the porridge were arranged in canning jars on a round platter.

I love these bread boards, where the crumbs fall into a tray below.

Knäckebröd, or hard tack, as it’s often called, is a staple at every meal.

Mini kanelbullars were heaped onto a large platter at the end of the long island – the perfect spot to grab one on the way out.

Not that I did that…okay, well, maybe once.

It was every bit as scrumptious as it looks.

The rhubarb sorbet was wonderfully tart and sweet – and how great does it look next to the black and white porcelain cup of coffee?

It’s a bonus when it tastes good, because, for me, it’s really about the photograph.

Tags: restaurant, restaurants, Stockholm, Sweden
admin
https://justonesuitcase.com
There is 1 comment for this article