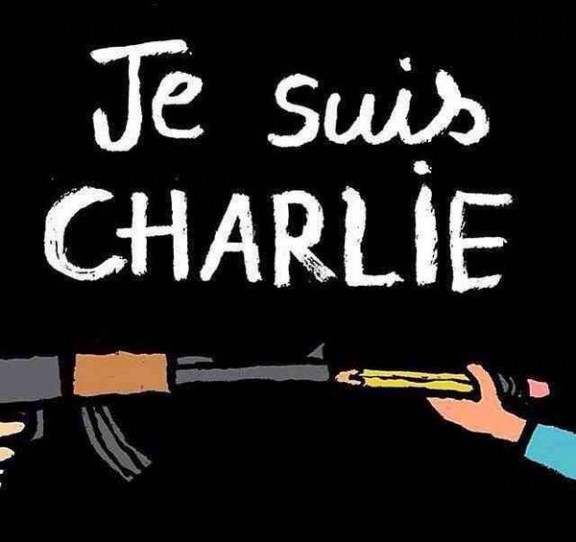 “The French cartoonist Stéphane (Charb) Charbonnier liked to say, when jihadis repeatedly threatened to silence him, that he’d rather be dead than live on his knees or live like a rat, so he kept right on drawing and publishing his loud, lewd, provocative, blasphemous caricatures of theocratic bullies. And now he’s dead – he and nine of his colleagues at Charlie Hebdo, the satirical magazine he edited in Paris – massacred by masked gunmen, who came for them in broad daylight, shouting ‘Allahu Akbar,’ and also killed two policemen before fleeing with a cry, ‘The prophet Muhammad is avenged.'”

Artists and cartoonists from all over the world have responded by paying homage with the indomitable spirit of free speech, identifying their creative tributes on Twitter and Instagram with #jesuischarlie.

Gathered from numerous sources, here are some of those imaginative cartoons.

Plantu, Le Monde, France
“Our hearts are with Charlie Hebdo”

Drew Sheneman, The Newark Star-Ledger, New Jersey
“Cartoons and satire are unspeakably offensive to my religion – mass murder, not so much”

Lectrr, De Standaard, Belgium
“Hmmm – the more I cut off – the sharper it gets.”

Bernardo Erlich, Argentina
“The world has become so serious that humor is a risky profession.””

Tomi Ungerer, France
“No Freedom without freedom of the press”

Albert Uderzo,
87-year-old creator of the well-loved French comic series ‘Asterix‘,came out of retirement to draw this cartoon.
“I’m Charlie too”

“The pen is mightier than the sword.”
Edward Bulwer-Lytton (1803-1873) English novelist, politician, and playwright

[Click here for updated information on the situation in France.]