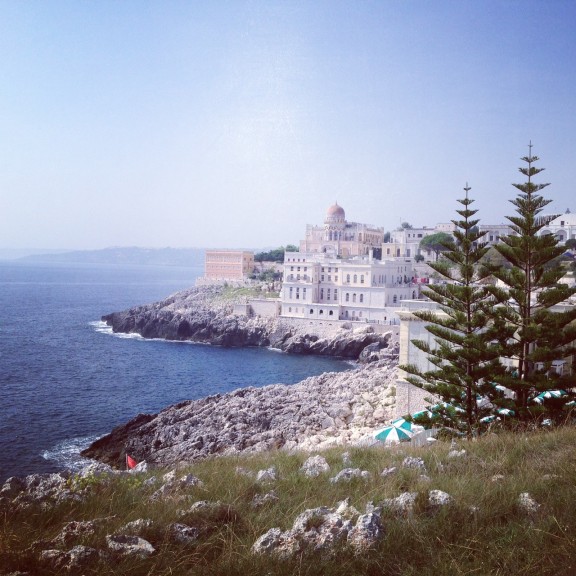 One of the perks of writing a travel blog is that I hear from people around the world. Anita Dore is a designer and painter, living in Luxembourg. She and her husband, Dave, recently traveled to the region of Puglia, Italy, in the “heel of Italy’s boot.”  It is the one part of Italy I haven’t been to yet, so I asked her to give me a report.

After reading about her trip, I can’t wait to go there myself!

Here is Anita’s account of her trip to Puglia:

We went to Puglia for a friend’s wedding, and then took the opportunity to explore the area.  After the wedding, we drove about two hours to the Masseria where we would be staying, near the town of Ugento.

Masseria Gialli (“yellow farm”) was wonderful.  Originally built in 1700 as a rural farm, it later became a noble villa.  The rich history of the masseria includes stories of poets and artists, peasants and kings.  Purchased by olive oil baron, Rocco Manco, in 1994, the masseria is now run by his sons, who are still engaged in the production of olive oil and organic farming, in addition to welcoming guests.

We ate at the restaurant every night and loved it. Breakfasts were THE BEST. Everything homemade, home grown, from the man-down-the-road kind of thing.  Delicious.  Everything is locally sourced, including the vegetables from their own farm. Even the wine is produced on the farm.  Fantastico!

The owners were extremely helpful with recommendations for places to go in the area.  One day we went to a beach called “Le Maldive del Salento”, near Ugento, on the Ionian side of the heel. Even though we were there on a cloudy-ish day (which totally bummed out our host, Rocco, because he was worried we wouldn’t get a great beach day), the water was aqua blue and the sand was soft soft soft.  The scene was very mellow with a nice mix of ages and I think we were the only non-italians.

Another day we went to the Adriatic side of the heel, the East coast, to go to a beach called Baie dei Turchi (“the Bay of Turkey”.) This was my favorite beach.  (Hard to find but worth it.) You had to park in a field up above, then walk through lots of trees and along the beach cliffs until you came down onto the beach.

The beach was small and it meandered among low, sandy bluffs creating small coves here and there. The water was like recycled green glass.  Also perfectly warm, gentle waves. Loved the crowd here. Some kids, mostly adults, mostly Italian. Lots of women in all ages, shapes and sizes in bikinis. That is something that surprised me about this area. Women had a LOT of body confidence and almost all of them wore bikinis. I wish I had. I saw women of all ages (into their 80’s) really comfortable in their skin and playing in the water and really enjoying being on the beach. It wasn’t about being perfect or looking perfect. So cool.

A travel hiccup that turned out to be a great story: When we were about to leave Taranto to go to Ugento we discovered our rental car was dead.  After many confusing phone calls to the rental car help line we finally got a tow truck to come. The driver was a large, serious-looking guy who didn’t speak any English.  He quickly discovered that our battery was dead but he didn’t have a big enough charger with him to get the car going again.

With lots of gestures and my guide book knowledge of Italian phrases, I figured out he was offering to drive us in his truck, and tow the car to his garage to charge the battery.  We hopped into the truck and hoped for the best.  As the tow truck driver said (I think) “what else are you going to do?”

The ride was longer than expected but also a lot more fun than expected.  Our driver turned out to be very popular in Taranto!

At every red light, stop sign, and slow down in the traffic, someone came out to say hello and chat with him.  And they in turn chatted with us; we had no idea what they were really saying, but everyone was so happy and friendly.  He tried so hard to make conversation with us and give us ideas for places to go (“Ostuni: bello, bello…”) and overall the ride turned out to be a really nice time.

When I took this photo of the three of us in his truck, he said “Hello America!”

Once we arrived at the garage he set us up with some chilled waters, charged our battery, and soon we were good to go.  What a great guy!  A potentially frustrating situation turned out to be a happy highlight of the trip. I’m convinced it has to do with the friendly attitude of the people of Puglia.  We encountered it everywhere we went.

I hope you get to go to Puglia soon! And if you are ever in Luxembourg, please look me up!