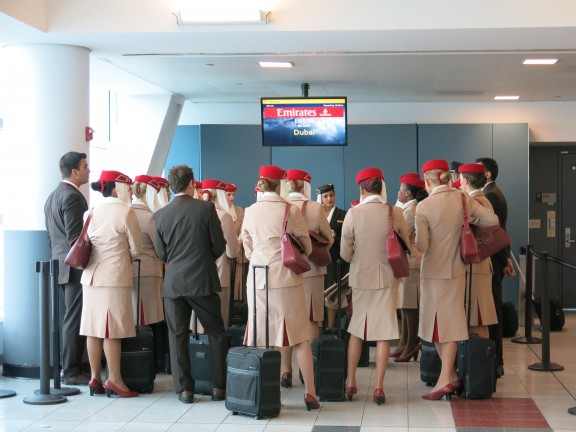 I’ve wanted to go to Dubai for a long time, so after days of worrying about snowstorms delaying my flight, a harrowing drive to the airport on roads slick with black ice, an altercation with the check-in agent about carrying on my suitcase (I won), I was at JFK airport, and I was JAZZED.

The Emirates flight attendants (from 13 different countries, speaking 18 different languages) gathered together at the gate, wearing their oh-so-chic, crisply tailored uniforms: sand-colored suits with dashes of crimson trim, matching red leather pumps and handbags, flawlessly applied makeup with the perfect shade of Clarins red lipstick, and hair twisted into a sleek chignon secured with a red scrunchie and topped with the signature red pillbox hat and silky chiffon scarf, evocative of the Arabic veil, that gracefully drapes around the face and under the chin.

Fourteen hours later, as the plane descended into the United Arab Emirates, I looked out the window at the city and saw, in the center, the needle-like Burj Khalifa stretching up into the sky.  It’s the tallest building in the world, and I was going to be staying in it, as a press guest of the luxurious Armani Hotel.
Oh yeah.  Here we go.

The airport glittered and gleamed. I tried out my newly-learned Arabic, “as’salam aliyakum”, on the customs agent.  He answered me back, “wa’alaykum salaam” and asked what other Arabic words I knew.  I rattled off a handful of words and he laughed – but I’m pretty sure he was impressed.

Outside, the Bentley (yes, you heard me) that the Armani Hotel had sent, was waiting for me.  When in Dubai…

Everything in Dubai is shiny and new.

That’s because the city is only 44 years old.  Just a few decades ago, Bedoiun nomads lived in tents in the desert here.  The discovery of oil in 1966 changed everything.

Now Dubai is a Jetson’s city of futuristic skyscrapers, a marina in the shape of a palm tree, massive shopping malls (one with an indoor ski slope), a famously theatrical fountain, the world’s only 7-star hotel, and, well, excess beyond excess.

It’s like nowhere else in the world, and it’s completely fascinating.

Ski Dubai, Mall of the Emirates

Citizens of Dubai pay no income tax, get free education and healthcare, and can even apply for a free piece of land to build on.  The Bedouins that once lived in tents now own fancy cars and live in showy mansions with satellite dishes and servants.

Sheikh Mohammed bin Rashid Al Maktoum, prime minister and vice president of the United Arab Emirates since 2006, is at the helm of Dubai’s transformation into the magnificent metropolis that it is today.  His vision is boundless, and he knows what he wants for Dubai.

Mohammed Alabbar, the chairman of Emaar Properties, is responsible for much of the city’s development.  When he first presented plans (years in the making) for the iconic Burj Khalifa tower to Sheikh Mohammed, he was faced with one question:

Alabbar was back to square one, and he knew what was expected.  He returned to Sheikh Mohammed three months later with plans for a tower that was 40% taller than any other building in the world.  This time the question was, “How soon can the cranes be on site?”

Finished in 2010, the Burj Khalifa is almost 3000 feet high, with 163 floors. The tower is the centerpiece of the skyline, and a symbol of Dubai’s focus on tourism.  (If you saw the queues of tourists waiting to go to the top, you’d see that they’ve succeeded.)

Current Emaar Properties projects include an opera district with an aim to bring the top opera companies to the city, and development at the Dubai creek that will include residential buildings, offices, hotels, and the most dazzling shopping experience in the world.

So the crazy thing is, Dubai is nowhere near finished. Today there’s construction everywhere, and the city continues to spread out into the desert.

The population keeps growing, and 80% are from other countries – an indication of the lure of luxury.

People often ask if I will go back to a location that I’ve traveled to.

Without hesitation, yes, I would go back to Dubai.  That’s because I know that it will not be the same city I saw on this trip.

They’re not done yet – not even close – and it’s just going to get more spectacular.

Tags: Dubai, UAE
admin
https://justonesuitcase.com
There is 1 comment for this article