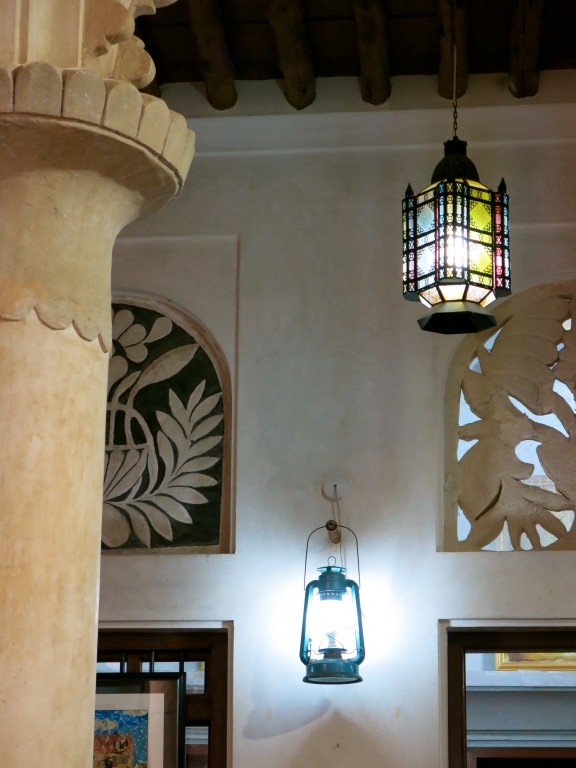 I only had two days in Dubai, so I knew I had to plan my time meticulously.  It was the perfect time to try out tripomatic.com, a travel site that plans itineraries for you based on the places you want to see.

Now let me just say, this is a great website…for travelers with reasonable expectations.  However, after I had entered all of my must-see activities/attractions/restaurants/stores into each individual day on the site, the schedule for the first day had sixteen hours worth of activities and eighteen hours on the second day.  Yikes.  What about sleep?  Jet lag?

I wasn’t ready to edit out things I wanted to do, so I had no choice but to abandon the digitally-planned itinerary and go old school, which means just keep going until you run out of time.

One activity that was a priority for me was the Q & A and traditional Emirati meal at the Sheikh Mohammed Centre for Cultural Understanding (aka SMCCU.)

The center was specifically founded, by His Highness Sheikh Mohammed bin Rashid Al Maktoum, Vice-President and Prime Minister of the UAE and Ruler of Dubai, to educate expatriates (80% of Dubai’s population) and tourists in the customs and traditions of the United Arab Emirates.

This was perfect for my jam-packed schedule, because I could get a meal and learn something at the same time.  Travel multi-tasking.

So here’s how my marathon first day went, arriving in Dubai at 7 a.m. after a twelve hour flight, and knowing that I had to be at the SMCCU at 7 p.m. for the dinner.

I began by checking in and learning about the particulars of my room at the Armani Hotel in the awe-inspiring Burj Khalifa, followed by a walkabout among the glamourous stores in the Dubai Mall.

A stop for afternoon tea back at the Armani Hotel, gave me a sugar rush to keep me going.

I headed to the Dubai Museum, in the Al Fahidi fort, to learn the history of the city with some unusual mannequins, and an amusing, “stating the obvious” warning about the door.

I made a brief stop in the museum gift shop, because who doesn’t love a museum gift shop?  I didn’t buy anything, but it’s always interesting to see what tchotchkes are on offer.

A meandering walk around every souk on both sides of the Dubai Creek included an abra boat ride back and forth, and a fantastic shopping experience in the gold souk.

When I thought I had lost my reading glasses, finding an eyeglass store became imperative.  A moment of vexation ensued when I realized how helpless I am without them, but then I looked up to see three eyeglass stores in one block (what are the chances?) and my spirits lifted.

I found an inexpensive pair of generic readers, and set off to find the SMCCU.

After walking in circles twice, I had to stop to ask a man for directions.  He pointed me in the right direction and told me where to turn.  “Shukran,” I said, and set off…only to come to a screeching halt when I did a double take and saw the tiny hand-painted boxes made of camel bones inside his shop. This was a worthy shopping diversion.

When I got my wallet out to buy one, I found the reading glasses I thought I’d lost, hidden in the bottom of my bag. Urghhh.

At the scheduled time, I reached the SMCCU, housed in a traditional wind tower house.  I removed my sandals and placed them in a little cubby.

Inside, a corridor led to a carpeted courtyard enclosed by a colonnade of massive stone arches.  Long tapestry cushions lined steps that led down to a lower level in the center.

Down the middle the lower level, a plastic runner trimmed with gold fringe had been laid on the floor, and platters and bowls heaped with the cuisine of a typical Emirati dinner had been assembled onto it.

Boxes of kleenex (to be used as napkins) had been strategically placed around the perimeter.

Seated around the spread, were a group of six talkative Malaysian men and women who took photos of each other and chattered throughout the event, an elderly German couple that spoke very little English, a solo Canadian man, a solo woman from the Czech Republic, and a group of three women and a man in their forties from the Netherlands whose relationships perplexed me for the simple reason that I was never able to figure them out.  Were they two married couples?  Were they siblings?  Where they just friends?  Was the man a polygamist?  Do they have polygamists in the Netherlands?  Okay, that was a joke.  Eventually I just stopped trying to figure it out.

Our hostess was a tall, gorgeous young woman, dressed in a fashionable navy and black abaya with a black hijab over her head.  Sitting at the “head of the table,” she described her life as a university student.

In keeping with Muslim tradition, she will live at home with her family until she gets married.  She spoke of the perks of being an Emirati; free healthcare, free education, no income tax.  One can also apply for a marriage fund and even a free piece of land.

The meal commenced when tiny cups of Arabic coffee, flavored with cardamon and saffron, were filled by a young man dressed in a kandura, the white ankle-length robe that Emirati men wear.

Why the tiny cups?  Because this way you will always be drinking hot coffee.  (Not a bad idea, right?) Traditionally, the youngest boy in the house serves coffee to guests, and just keeps going round and round refilling cups.

Dates were then passed around from an etched-glass bowl.  Served at the start of a meal, they are considered to be a sign of welcome to guests.

We were then invited to help ourselves to the feast before us, which included:

Saluna – a stew made with chicken and a mixture of seasonal vegetables.

For dessert there was ligamat bites, round donuts the size of “munchkins” , served with thick date syrup.

We filled up our plates, and then went back for seconds, or thirds in the case of the Canadian man.  The Malaysian group took pictures of each other, posing with the food, our hostess, each other, you name it.  The German couple mingled with the Czech woman.  The Dutch people, who still gave me no indication of the relationships among them, happily shared their food with one another.

To signal the end of the meal, and a fond goodbye, our young hostess lit incense in a wooden vessel.

Sheik Mohammed’s motto is “open doors, open minds,” the objective being to encourage cross-cultural understanding and communication between locals and guests.

I think the rest of the world could take a page from that book.

P.S.  That wasn’t the end of my marathon day…I finished with a cocktail on the terrace of an Armani Hotel restaurant, at the base of the Burj Khalifa, watching the famous fountain dance to the music.

Tags: Dubai, UAE
admin
https://justonesuitcase.com
There is 1 comment for this article