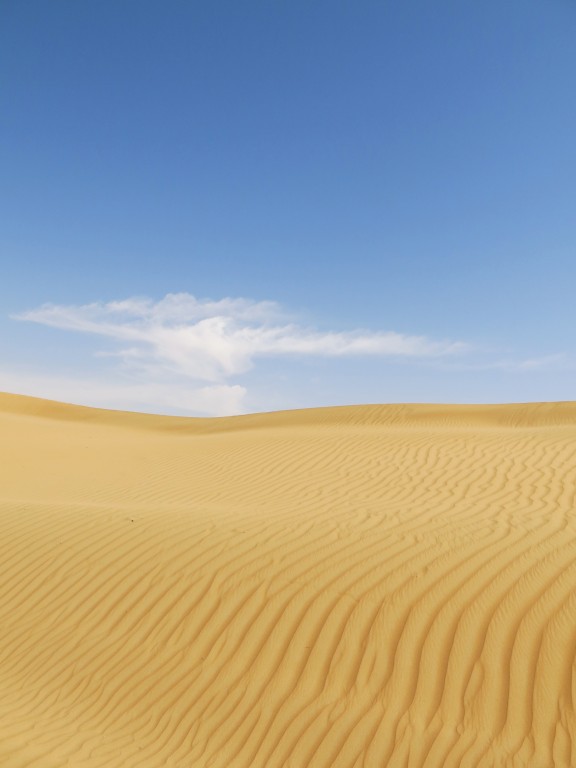 Even though I was only in Dubai for two days, with at least four days worth of places I wanted to see, I was determined to find time to go to the desert.  When would I have another opportunity to be in the desert in the Middle East?  Furthermore, the way the Dubai metropolis was spreading, who knew how much longer there would even be a desert?

As luck would have it, I found a morning desert tour, including camel riding and breakfast in a Bedouin camp. I could still be back in the city by noon and carry on with my marathon itinerary.  Planning ahead, I signed up for the Platinum Heritage Wildlife Drive and Bedouin Breakfast in advance.

“Your professional Safari Guide will lead you on an early morning desert safari drive in a vintage Land Rover.  Discover what life was like inside the Dubai desert before modern developments, when you hear fascinating tales first-hand from a local Bedouin, before enjoying a scrumptious breakfast. This is a rare opportunity to glimpse into the rich history of the region, experience pristine Dubai desert, observe native wildlife, ride a camel and meet one of the original inhabitants of this land.”

I considered what attire I would need for camel riding, and looked forward to what I was confident would be a top ten travel experience.

Then, two days before my departure, I received an email from the company saying that the desert tour had been cancelled because there’s a minimum of three people required, and no one else had signed up.

I immediately went online in search of alternatives, but no one offered a tour in the morning, and it was the only way I would be able to do everything else on my list.

I despaired as I boarded the plane, but decided to deal with it when I got there.

Well, the desert gods must have been smiling down on me, because when I landed in Dubai I opened my inbox to find this:

“I have a very good news for you.  We just received a booking for 2 people for the Heritage Wildlife Drive and Bedouin Breakfast.  If these guests will not make any changes for their booking, then we are going ahead.  We will keep you posted.”

Okay, the “keep you posted” part of the email gave me pause, but hopes were high.

Fast forward to my second morning in Dubai.  I was picked up by a guide named Faisal, and got into an SUV for the drive to the desert.  In the back seat were my saviors, my travel companions, a young couple in their twenties from Germany.  Both med students, they could have a second career as J. Crew models.

We drove out of the city, through the forest of shiny towering skyscrapers, until the landscape transitioned into desert.

From this vantage point, I could see the Dubai of forty years ago.  It was here that I could see Dubai’s history.  Construction was everywhere, a sign that the city was creeping out further into the desert.  Some projects were left abandoned, like the Universal Studios arch that stood alone in the sand.  The theme park had never been completed.

Our first stop was at the enormous Al Marmoom camel racetrack, home of the Dubai Camel Racing Club.  Camel racing is considered to be the national sport of the United Arab Emirates.

I learned from our guide that the camels learn to race when they are two years old and apparently, in spite of the robotic “jockey” that uses electric jolts to encourage speed, they quite enjoy it.

Looking at this motley crew of camels lounging in the sand, it was hard to imagine they could get up and careen down the track.  Just look at the lot of them.  They look like plush toys.

These camel trainers were killing time alongside the track.  I waved and said, “salaam,” which I had learned was the abbreviated version of “as’salam aliyakum.” They waved, and laughed at the blonde chick’s attempt to speak Arabic.

As we pulled out of the stadium, Faisal told us that the prize for winning a race is a luxury car, presented by Sheikh Mohammed bin Rashid al Maktoum, Crown Prince of Dubai.  His portrait is on a billboard at the entrance of the track.

We arrived at the Dubai Desert Conservation Reserve, to transfer into a vehicle that was desert-worthy.

Here’s Faisal with the groovy vintage Land Rover that we would be navigating over the sandy terrain.

Faisal tossed a scarf to each of us – black gauzy cotton for the girls, and the traditional men’s pattern of red and white to the guy.

With a flourish, a twist, and a tuck, he swathed our heads with the traditional shemagh, leaving one side loose that could be wrapped over our faces for protection from the sand.  Here he is wrapping up the heads of my companions.

And then we were off, hurtling across the desert.

It was exhilarating…a vast landscape of yellow sand as far as the eye could see, beneath a scorching sun in a clear blue sky.  Just as I’d imagined.

I couldn’t stop snapping pictures, hundreds of them, knowing full well that I would delete most of them because, let’s face it, they all looked exactly the same.

We arrived at a former Bedouin camp, enclosed by a stone wall on one side, and walls made of palms on the other three.  Surrounding it were a few palm trees and and sand as far as the eye could see.

As we walked into the camp, rosewater was sprinkled into the palms of our hands from an elegant brass vessel, a sign of welcome.

We were served tiny cups of Arabic coffee, and offered dates from a large wooden bowl, another welcome tradition.

In the center of the camp, carpets were laid on top of the sand, with cushions lined up around the edges.

Vignettes set up to represent what a real Bedouin camp had looked like, presented me with a bevy of Arabian style moments.

Tents – a shelter from the searing sun, stood in the corners.

Inside the tents were low tables, benches, and stools.

Breakfast was served.  On wooden plates, we were served the traditional morning fare:

-Chbaab – pancakes made with flour, eggs, and sugar; spiced with cardamon and saffron and served with local date syrup.

-Herb stuffed bread of some sort

-Dungaw, chick peas boiled with spices that are a Bedouin staple, served from a separate wooden bowl.

Eyes behind dark sunglasses, and the fact that he needed a translator, made him a formidable figure.

The Q and A began, and we learned about how his life as a Bedouin has been altered with the development of Dubai.

Here’s the thing.  Fifty years ago he was a nomad, living in a tent and moving around the desert with his herds of goats.  Now he lives in a mansion, with air conditioning and a satellite dish, and a fleet of fancy cars parked out front.  His children are professionals with college degrees.  In his (now ample) free time, Hamad enjoys racing his herd of camels at the aforementioned track. (Four out of ten of his camels have won races.)

In other words, he’s quite happy with the change of events.

When the audience with the Bedouin wrapped up, we were invited out back to ride camels.

I hopped onto the hump of a camel named Reema and held on for dear life as she wobbled, straightened her back legs, and then stood up.

A word about camels.  That hump stores up enough sustenance for them to travel up to one hundred miles in the desert.  They don’t sweat, so when they refill (and reportedly they can drink about 30 gallons of water in 15 minutes), they can go up to six months without food or water.  Camels are herbivores, but aren’t picky about what they eat, and thick, tough lips make it possible for them to eat even the thorniest plants.  They can close up their nostrils to avoid sand storms, and those legendary eyelashes – 2 rows of them – protect their eyes.

All this, and they can carry up to about 500 pounds on their backs.  Seriously, these creatures are indomitable.  Even if they do look like plush toys.

This was my vantage point as Reema ambled around the desert.

When she finally stopped and kneeled down with her front legs to let me off, I practically flew over her head face first into the sand.

Note to self: hang on tight when disembarking from a camel.

I watched as the next group headed off into the desert.

Then we hopped back into the Range Rover to go see some exotic animals.

I was getting embarrassed for Faisal as we drove and drove and there were no furry beasts in sight, but he didn’t seem concerned.

Suddenly he slowed down to a stop and there was a graceful little gazelle looking up at us.

After we drove a little further, I saw the mother lode ahead – a herd of oryx.  (Or is it oryxes?)

This exotic desert animal did not disappoint – the mere look of them, with their long slender pointy horns, was extraordinary.

Kicking it up a notch, one of them charged at us, and then another two literally locked horns in a squabble.

I almost jumped with joy when I saw this reflective photo op.

We drove a little further, and Faisal parked the vehicle under a tree so we could wander about a bit before we headed back to civilization.

The German couple posed for me in the back of the Range Rover before going off to take selfies.

I came across this classic desert scene-of-the-crime: dried up skeletal remains.

Then I took off my shoes, and sunk my toes into the sand.  It was surprisingly cool under the hot top layer.

I stood alone and looked across the vast expanse of desert, stretching to the horizon.

After a moment, I realized I was smiling.

This quote from travel writer, Paul Theroux, exactly describes the thoughts behind that grin.

“The wish to travel seems to me characteristically human: the desire to move, to satisfy your curiosity or ease your fears, to change the circumstances of your life, to be a stranger, to make a friend, to experience an exotic landscape, to risk the unknown…”

Tags: Dubai, United Arab Emirates
admin
https://justonesuitcase.com
There are 3 comments for this article