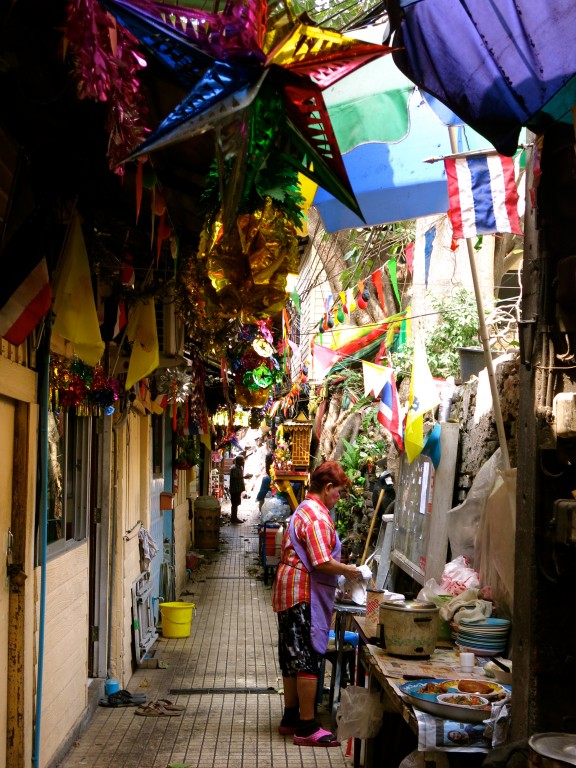 This was my first day in the exotic, boisterous, quirky, sweltering, exhilarating city of Bangkok.

I had arrived from Dubai the night before.  My home for the next several days was a lovely guesthouse called Ariyasomvilla. The original villa had been built by the owner’s grandfather in the 1940’s, in what was then the outskirts of Bangkok.  Now it’s in the middle of the city.

This was the first thing I did when I arrived.

The next morning, I had breakfast in the garden.  It was glorious.

I didn’t linger long, though, because I had a lot of Bangkok to see.  I was ready to leave the sanctuary of Ariyasomvilla and face the city.

The resident dog sat up and gave me a restrained send off.

With just a few steps into the street I was dripping with sweat.  It was early in the morning, and the heat and humidity were already stifling, so all I could do was surrender to it.  (FYI, perspiration and I are not a happy couple.)

Before I could see the source, I caught a spicy whiff of Thailand’s notorious street food.  When I got closer, I saw that a woman was stirring a concoction of fish and vegetables in a jumbo wok.

Next to her, this young man was doing something (??) with wide, translucent noodles.

This little girl hitched a ride with her dad. I love this photo.

In Bangkok you can’t walk a block without passing a 7 Eleven. There’s one on every corner.  Sometimes they are even across the street from each other.  If you’re wondering why, just start to type this into Google: “Why are there so many 7 11’s…” and Google will actually fill in “in Thailand.”

The other business there’s plenty of is massage establishments. It’s also a Thai thing, and it’s quite common to see several next door to one another.  Because they are store fronts, you can just look in the window and see people sitting in a row of recliners getting their feet massaged. The cost can be anywhere between $5 and $20, depending upon the type of massage.

Above this street food vendor you can see the track for the BTS Skytrain, Bangkok’s metro system – which is where I was heading this morning.

On the streets of Bangkok it’s always rush hour.  Consequently, if you want to get anywhere, you take to the air (BTS Skytrain) or water (Chao Phraya River ferries.)

In this case, I had to take the BTS to get to the river.

My BTS stop, which I grew to know and love, was Phloen Chit.

This is what it looks like when the train leaves.  Notice the arrows on the platform.

This is what the platform looks like when you’re waiting for a train.

While I was waiting for the train, I looked across to a billboard that was advertising skin whitening cream, and a small statue of a Chinese warrior standing randomly atop an office building.

Note: Both photos might very well have qualified for their own “Weird but Wonderful” blog post (although the first one might not be exactly PC) but honestly, there were so many WBW’s in Bangkok, I could run them every day for a month…so I decided to let these two join this post.

When I got off the BTS, I found my way to the Chao Phraya River ferry, my final destination: The Grand Palace, official residence of the Kings of Siam since 1782, and home of the Temple of the Emerald Buddha.

Just in case you want to do this, your best bet is to catch the Orange Flag boat, which runs about every twenty minutes. It costs 15 baht (about 45 cents) regardless of where you’re getting off.  Don’t be bamboozled by an “offer of help” into an expensive tourist boat.  Just get on the bench with everyone else and mind your own business until the regular boat comes.

I disembarked from the ferry at Saphan Taksin, and moved as one with the crowd into the narrow confines of this colorful market.

There were stacks of pineapple cut into spirals; flowers woven into garlands to present to Buddha; ripe, luscious fruit; and coconuts ready to pop a straw into.

As I emerged out of the market, I could see the crenelated white walls of the majestic palace. I followed along towards the entrance.

I knew that this, the number one tourist destination in all of Bangkok, would likely get crowded…but I’m a savvy traveler, so I figured I would just get there exactly when they opened and beat the crowds.

As you can see, there’s no beating the crowds.

The palace is magnificent.  It’s also massive.  So here’s what we’re going to do.  I’m going to write a separate blog post about all the breathtaking design details of the royal compound, and yet another to show you how selfies have taken over the world.  And just wait until you see the peculiar and amusing signage.  Yes, you guessed it, in a future post.

For now, I’ll just share some of my favorite moments.

First, a preview of some of the dazzling details.

At the door, I had purchased the items I needed to make an offering to Buddha. The traditional offering is called wai phra, and usually consists of a candle, a lotus flower, a small square of gold leaf, and three incense sticks.  A kind guard showed me how to light the three incense sticks (representing the Buddha, his teachings and the monastic order) and then place them in an urn filled with sand.

The lotus flowers are laid gently onto a silver platter, and the small square of gold leaf pressed onto the Buddha image.

Shoes must be removed before entering the temples, a rule that results in this scenario.  Just don’t forget where you take yours off.

These adorable little girls were oblivious to the chaos around them.

A group of school girls sat in neat rows, sketching the details of the mural before them.

These two girls posed happily for me.

I was so thirsty I almost used one of the cups on top of the drinking water dispenser…but then I thought better of it.

At about the time I saw the cool towel kiosk, it was time to move on.

Numb with thirst and oncoming heat stroke, I was on the verge of developing a claustrophobia disorder and I’ve never been claustrophobic before.

I jumped into the surge that was pushing out the exit.

Don’t get me wrong.  I loved every minute…because there’s nothing I love better than an adventure in a foreign land.

Even if it was hotter than H – E – double hockey sticks and there were thousands of maddening tourists.

I was looking forward to my next stop, the amulet market.  A whole market just for amulets!

Check back in (or subscribe so you don’t miss it) for the other posts about the palace, the amulet market, and the rest of my first day in Bangkok!