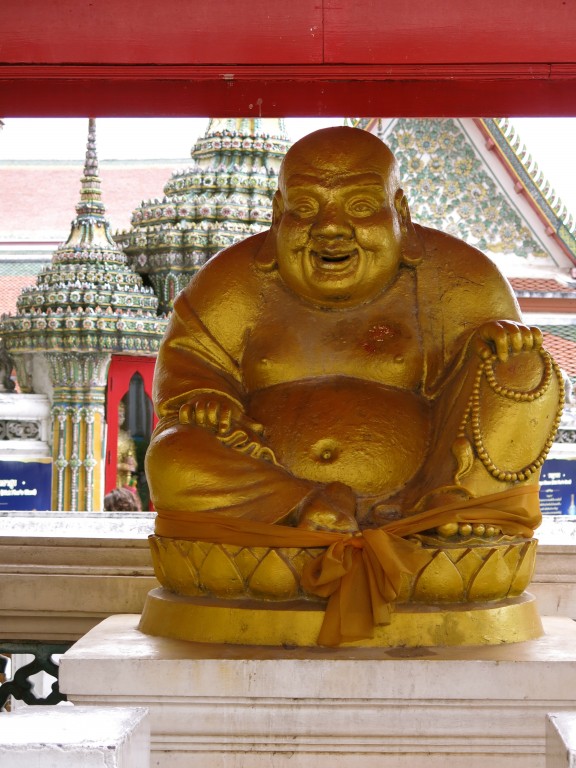 More than 90% of people in Thailand are Buddhists, and if I was going to be in their presence and visit their temples, I needed to learn more about who Buddha was and what Buddhism means.  A small disclaimer: I don’t claim to be a historian or an expert – this is what I learned, in my own words.  Don’t judge me.

So here’s the story, as I understand it.  A couple thousand years ago, there was a prince in Nepal by the name of Siddhārtha Gautama.  He was born with the proverbial silver spoon in his mouth, and lived the affluent and sheltered life of a royal.

When he was in his twenties, he ventured out into the world and was shocked to encounter suffering, sickness, poverty, and death.  Rather than run screaming back into the sanctuary of his cushy life, he set out to change things and find the secret to true happiness.

Taking things to extremes (as people in their twenties will do), he forced himself to live in bleak conditions, starving himself in the process.  After several years of this, he realized that deprivation didn’t provide happiness any more than wealth and luxury had.

As the story goes, it was then that Sid decided to sit under a tree (the famous “bodhi tree” I wrote about in a previous post) until enlightenment was revealed to him.

Sure enough, after a few days, he figured out that there was a middle ground:

“Happiness does not depend on what you have or who you are, it solely relies on what you think.”

From this point forward, he was known as Buddha,
“The Enlightened One.”

He devoted the rest of his life to teaching the principles of Buddhism, which are, in a nutshell:

(1) to lead a moral life,
(2) to be mindful and aware of thoughts and actions, and
(3) to develop wisdom and understanding.

To conclude, Buddhism is not a religion that worships Buddha as a god or deity, but is a way of life.

“Live in joy, in love,
even among those who hate.

Live in joy, in health,
even among the afflicted.

Live in joy, in peace,
even among the troubled.

Look within, be still.
Free from fear and attachment,
know the sweet joy of the way.”
-Gautama Buddha

So let’s talk about all those magnificent temples and golden statues.  The ceremony in going to a temple and kneeling to a Buddha statue is not to worship or to ask for favors, but to express gratitude for his invaluable teachings, and to pray to live a life of positivity and peace.

Buddha likenesses have varied in appearance throughout the centuries. In a previous post, I told you about the colossal Reclining Buddha at Wat Pho in Bangkok.

Wat Pho is also renowned for having almost four hundred ancient Buddha images, of different styles and periods, from various regions of Thailand.

There are golden statues standing in rows, and others sitting in the traditional lotus position, hands resting gently in their laps, compassionate smiles on their faces.

You can also buy your own Buddha likeness.  There are countless statues of every shape and size sold in stores all over Thailand.

In some temples, there are statues and realistic likenesses of esteemed Buddhist monks.  These are wax figures in a temple that I visited in Chiang Mai.

There are several rituals in Thailand that go along with praying for guidance from Buddha.  The supplies are typically for sale at the entrance to the temple.

Three incense sticks are lit, one for Buddha, one for Sangha (the Buddhist community), and one for Dharma (the teachings of Buddha.) A small candle is also sometimes lit, to signify enlightenment.

A lotus flower symbolizes the purity of Buddha’s teachings.

Gold leaf is placed onto the Buddha statue, in the form of a small square adhered with a fingertip, to honor the illuminating doctrines.

Garlands of colorful flowers are also offered to the statues, to symbolize the beauty of Buddha’s beliefs.

Throughout Bangkok, there are people making and selling all manner of floral festoons to take to Buddha.

While I was in Thailand I stumbled across a couple of other unique Buddhist traditions.

One was outside a temple in Chiang Mai – the one with the wax monk figures.  I saw a table covered in a yellow plastic tablecloth, and some shiny items in a box.

I was with a guide, who instructed me to put 39 baht (about $1) in a metal box, and then take a little gold embossed rectangle out of the plastic bin on the table. Then I used a pen to press my name, birthdate, and Chinese zodiac sign into the metal. The guide studied the carvings on the temple wall to determine that my sign was the Dog.

I slipped the gold page into a slot in a plexiglass box, where the monks will collect it and say prayers for me.

Wherever I am in the world I like to participate in religious and cultural traditions, to better learn about the people.

That said, I’ve never been one for seeking out psychic predictions of the future…until I stepped into a tiny temple in a bustling night market in Bangkok and learned about this Buddhist custom.

The temple was a small alcove, filled with a massive statue of celebrated eighteenth century monk, Somdej Phra Buddhacara Toh Phramarangsi, aka, Somdej Toh.  He was surrounded by the typical offerings of incense and flower garlands.

But that’s not all.  On the floor in front of him were bamboo cups filled with numbered wooden sticks.  I learned that this is called Kau Cim, and it is a traditional Buddhist fortune-telling technique that was brought to Thailand from China.  (There’s a historical story behind it, but suffice to say, it’s a tradition that is thousands of years old.)

After you pay your respects to the Buddha icon, you pick up the cup and shake it – until one stick falls out.  It’s like a game.  Here’s another woman doing it.

The number on the stick corresponds to a numbered sheet of paper on the wall, on which your fortune is printed.

I shook, and out fell a stick with the number 9.

Lucky number nine, that is.

Yup, I hit the jackpot – because in Chinese astrology, and in Thailand, nine is an auspicious number.  The number nine brings good fortune and progress.

I’m not superstitious, but, what the heck, I’ll take it.

I pulled my printed fortune off the wall.

I don’t know about a fish transforming into a dragon, but since I returned from Thailand, I’ve traveled to Florida and California (south and west from Connecticut), and my design business has been lively.

“Good lucks approaching” sounds nice, but if there’s one thing I learned from Buddhism it is that you make your own good fortune.

“Do not dwell in the past,
do not dream of the future,
concentrate the mind on the present moment.
The way is not in the sky.
The way is in the heart.”