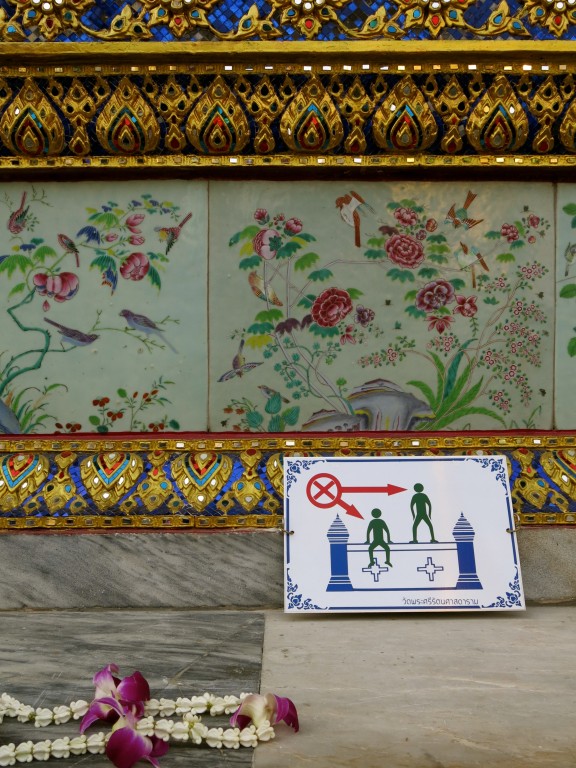 It is often in the settings of magnificent historical landmarks that I encounter the most amusing signage. Bangkok’s sacred temples were no exception: Exhibit A, the photo above. The graphics indicating not to sit on the monuments gave me a chuckle.

This sign at the entrance of the Grand Palace was surely prompted by a series of unfortunate mishaps with the admission ticket.  I guess it was cheaper to make the sign than to redesign the tickets.

“Please keep the dark brown part of the ticket well because it can easily fall off from the whole ticket.”

Also at the Grand Palace entrance, the queues were segregated by signposts.  Thai citizens clearly had an advantage in this situation.

The ups and downs of these signs were referring to vague entrances and exits to the temple.

Check out the whimsical drawings of the banned hat and shoes.

At the entrance to Wat Pho, there was a notice that included a little bit of everything, assisted by some irreverent animated characters.

In appearance, these ornamental signs in front of the illustrious Reclining Buddha might have seemed more in keeping with their environment, but rather than noting historical features, they warned of the presence of pickpockets.

Someone designed these fancy signs to tell people not to sit on the buddha statues. It’s unfortunate that people need to be told this, and the fact that the “T” is broken on both of them means that the warning was ignored…unless someone just liked stealing the letter “T.”

I don’t know what is more peculiar – the appearance of the signs, or the fact that they are needed at alL.