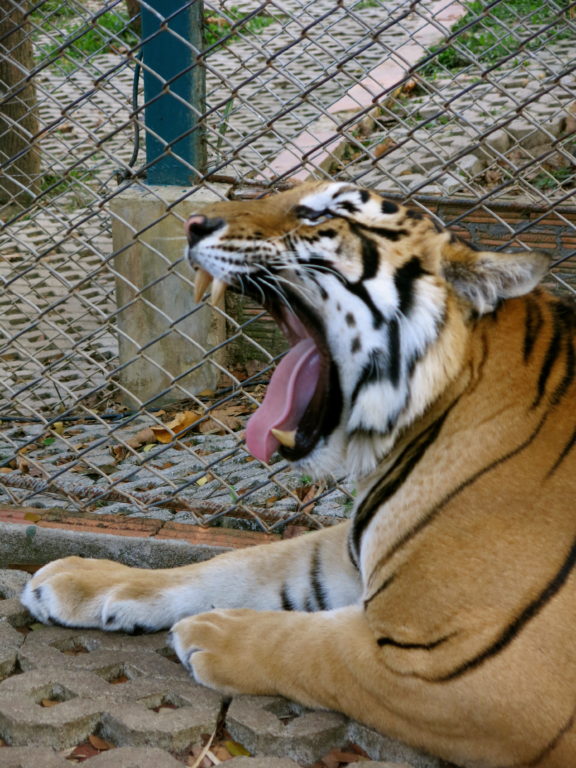 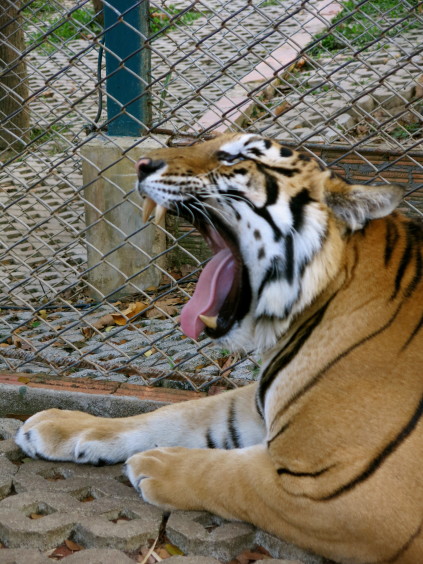 So it all started with a taxi driver named M. He was nothing like the all-powerful M in James Bond movies. My M was an unassuming twenty-something Thai taxi driver, who became my personal tour guide the day I landed in Chiang Mai.

I flew from Bangkok to Chiang Mai, in the north of Thailand, without a plan. I know, I know, this is very uncharacteristic of me, but there you have it.

Hopping into the first taxi in the queue, I struck up a conversation with my driver, M. He asked what my plans were in Chiang Mai and I had to admit that I had none.

He offered to be my guide.  I read the sign tied with twine to the back of the front seat, and thought, “why not?” 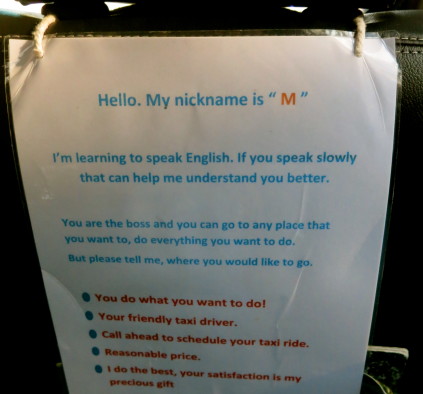 We negotiated a (reasonable) price and, after I had dropped my suitcase off at the hotel, I hopped back into his SUV for the time of my life. 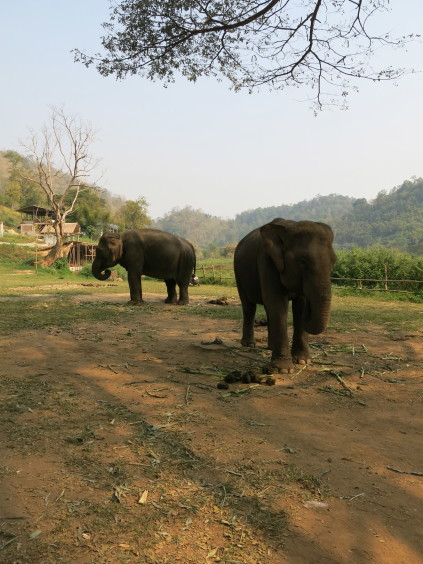 Elephants are iconic in Thailand. They are a traditional symbol of royal power, an essential feature of Buddhist art and architecture, a spiritual mentor. The elephant is a symbol of strength, power, stability and wisdom.

That said, there are a LOT of touristy elephant parks in Thailand, and I wanted nothing to do with them.

M took me to an off-the-beaten-track elephant sanctuary. 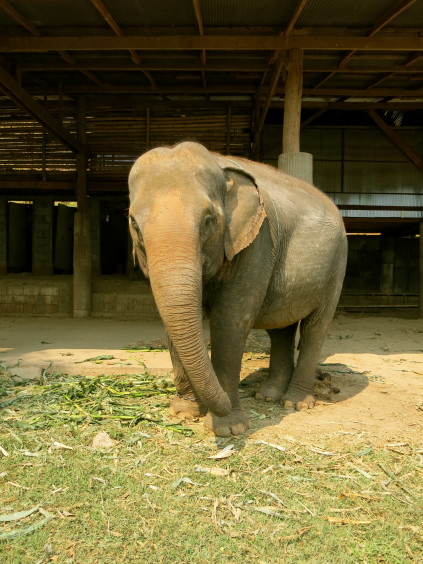 I hadn’t dressed for riding an elephant bare-back across a river (what wardrobe would that be anyway?) but, crisis averted, they gave me clothes to change into – a denim shirt and matching long shorts.

We gathered bananas into cloth bags to feed to the elephants. (One of the elephants subsequently ate the whole bag.  And by that I mean the bananas and the bag they were in.) 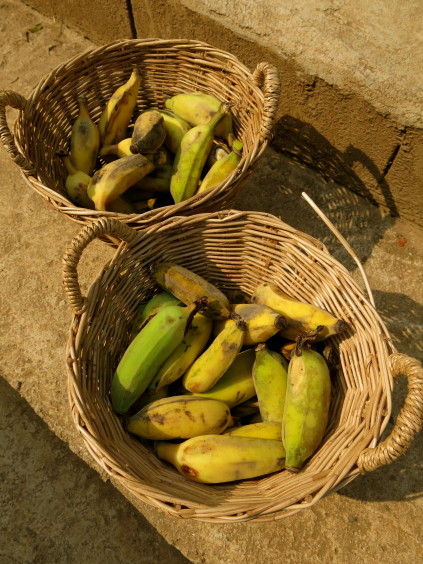 I was given a lesson on the commands I would need to know in order to guide the elephant.

Here’s what I learned.

Keep in mind I had to memorize the words and the actions.

-kicking (behind the ears) right to go left: “sa-ee”

-hands on head to stop: “haow”

It took a little trial and error before I got it right.

In other words, I had my elephant going in circles. 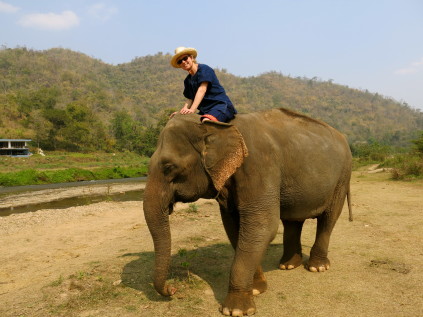 My elephant and I headed across the river.

I was barefoot, and, as instructed, doing all the steering with my knees.

This was my vantage point. 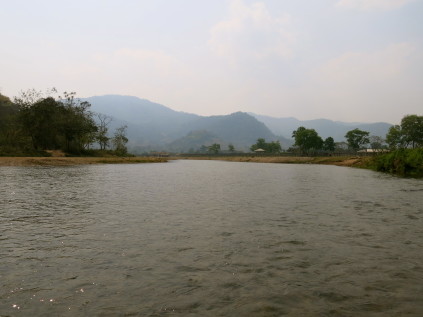 Once we were across the river, we carried on through the jungle. 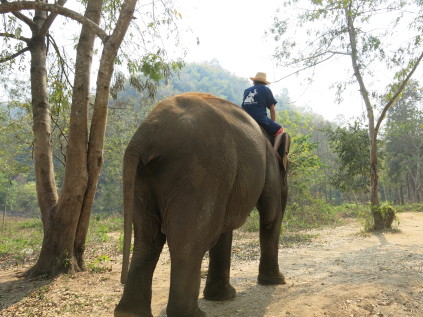 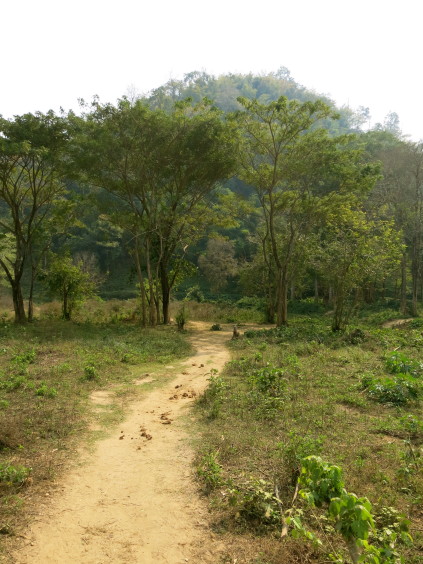 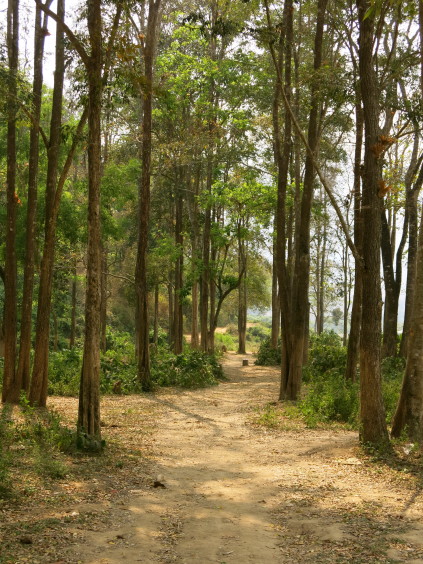 Out of nowhere, a passerby appeared. I said hello. 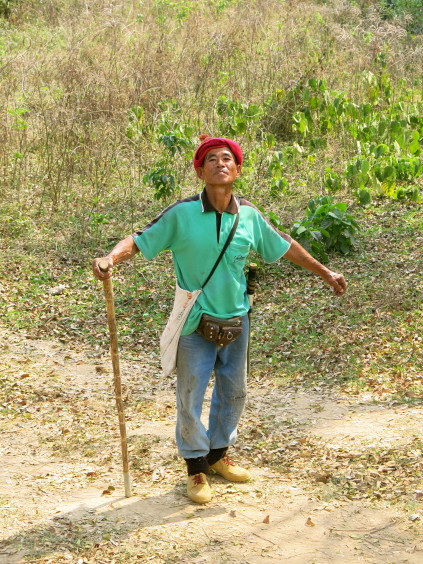 Across the river, I could see another elephant reserve. 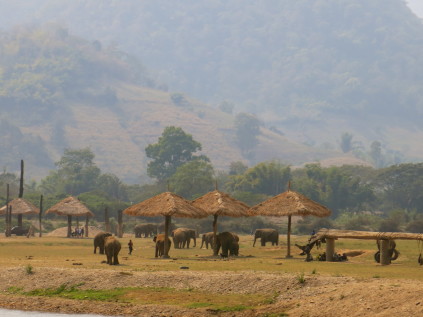 When we came back around to the river, I spotted a bevy of water buffalo bathing in mud. 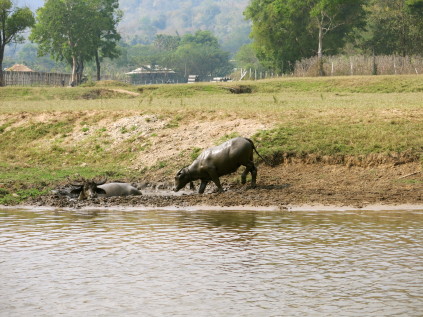 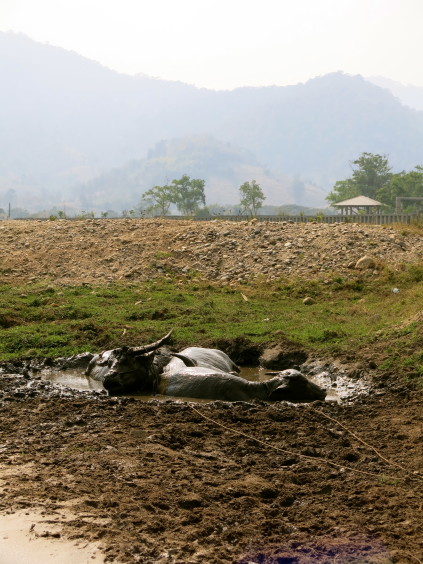 They were literally rolling around in it. 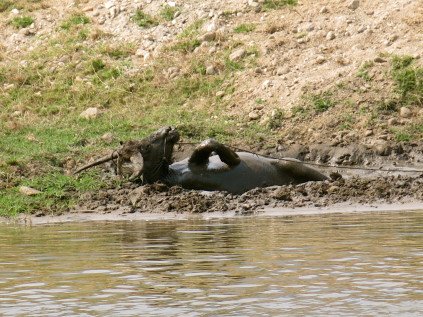 It was also bathing time for my elephant, and I was there to help out.

Then the funniest thing happened.

My elephant had an itch that needed to be scratched.  He got out onto the shore and went to work.

Just look at that face.

After my elephant’s itch was scratched, I hopped back on and we returned to the camp, where I said farewell, dear pachyderm.

I’d like to remind you that I had arrived in Chiang Mai with no plans.

I hadn’t thought about riding elephants or going in tiger cages.

I was just going with the flow.

And so, next stop, the tiger kingdom.

At the entrance to the tiger kingdom, I had to decide if I wanted to go into a cage with a small, medium, large, or extra large tiger.

This was one of those moments where you’re on a runaway train and you just keep going without stopping to question whether or not it’s really a good idea.

I chose the medium-sized tigers, having no idea what that really meant.

I don’t normally read directions, especially when they are telling me what I shouldn’t do.

The tiger kingdom was the exception. I read each and every sign as I walked among the cages of enormous tigers.

“Do not touch the front paws, head or face. Do not run around or make sudden movement.”

“DANGER. Do not put anything inside the cage. Especially fingers or hands.”

This last one gave me pause, considering I was about to go inside the cage with my whole body. 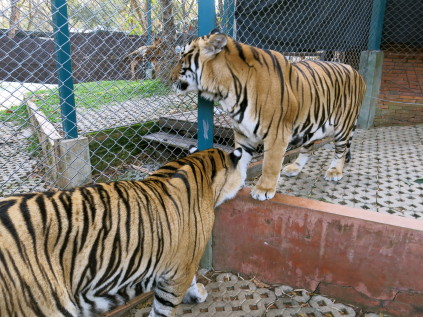 When I reached the cage of the medium-sized tigers, a young hippie couple from Serbia were there, shooting iPhone videos of each other, greeting their parents.

Just in case they didn’t make it out alive.

The gate was raised, and the three of us went inside, where four restless tigers were noisily snarling at the tigers in the neighboring cage.

There was an attendant walking behind the tigers, nudging them with a small bamboo stick.

At first I wondered what good that little stick was going to do if the tigers got ornery, and in the next moment worried that the little stick would annoy the tiger into becoming ornery.

I voiced my concern about the latter.

As a result, the attendant got ornery, held up his hands, and said, “Fine, then I won’t use the stick, but they’re agitated because it’s just about feeding time.”

He stepped aside and left the lumbering animals to their own devices.

The Serbian hippie couple looked at me and we all laughed nervously as we watched the growling, prowling tigers. 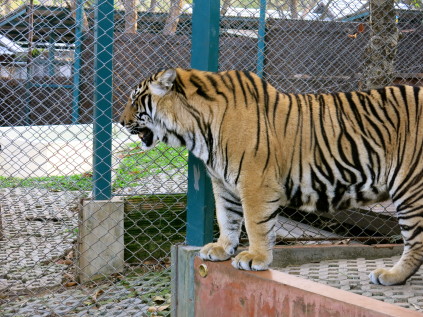 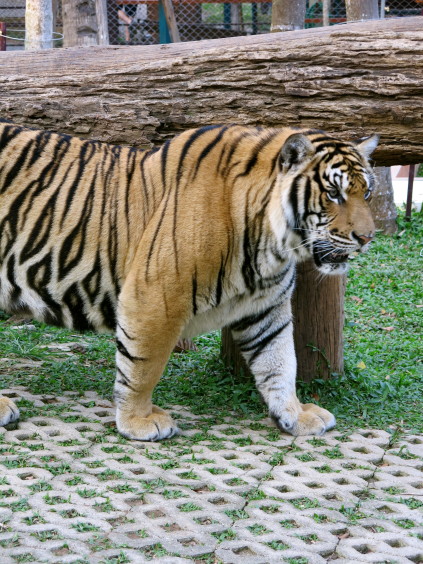 Yes, I was scared.

Yes, I knew it was probably not a good idea to be inside a cage of hungry tigers with their big teeth and sharp claws.

No, I most likely would not do it again. 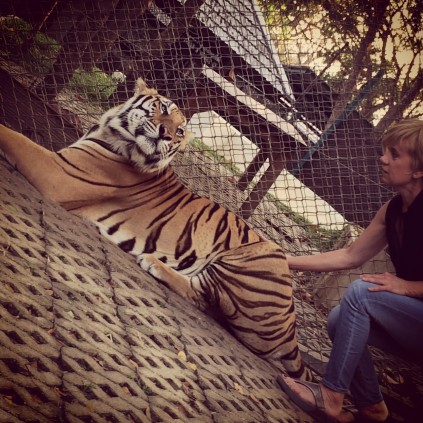