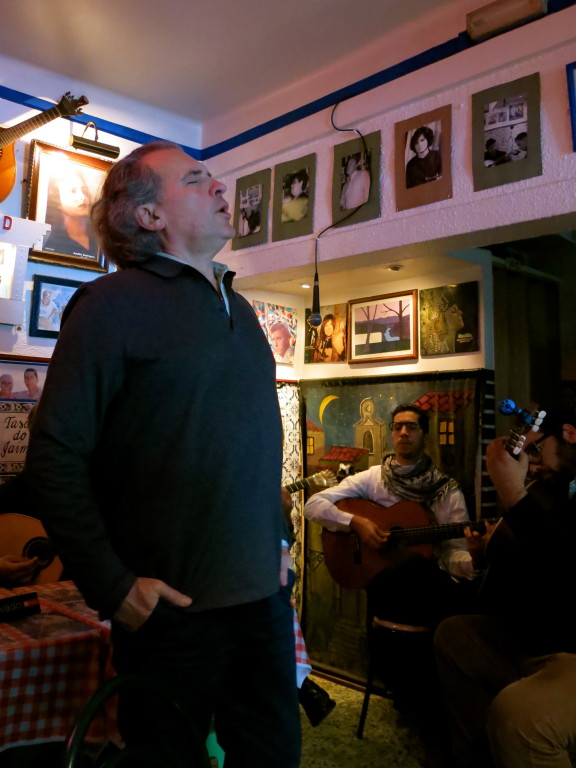 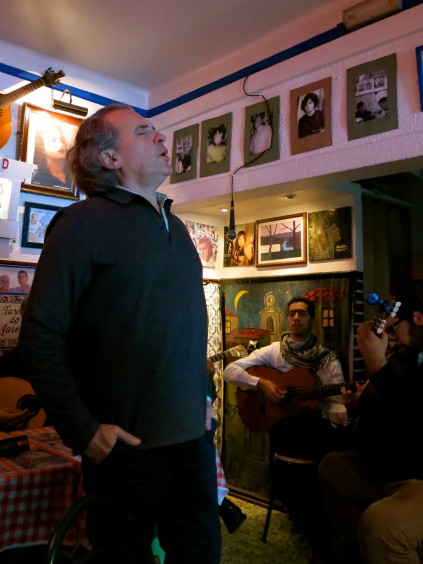 In Lisbon there are scores of fado music shows, pretty much everywhere you look — but if you know anything about me, you’ll understand that the last thing I wanted to see was a show for tourists.

So I found Tasco do Jaime da Graça. It’s now one of my Top Ten Travel Experiences.

The music of fado is an integral part of Lisbon’s past. (It’s even been classified by UNESCO as an “Intangible Cultural Heritage of Humanity.”)

Fado means “fate,” and the songs of fado evoke the Portuguese word, “saudade”—untranslatable in English. Saudade describes an emotional state of of yearning, nostalgia, and melancholy.

Portuguese writer, Manuel de Melo, described saudade as “a pleasure you suffer, an ailment you enjoy.”

In other words, fado music is the Portuguese blues. 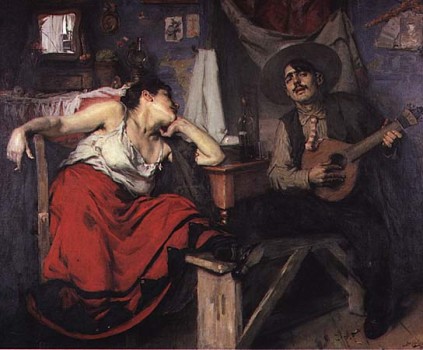 The origins of fado are difficult to trace, but we know from narratives that it dates back to the early 19th century, and was initially associated with the working class in the Lisbon neighborhood of Alfama.

Performed by a solo vocalist, fado is traditionally accompanied by one or two guitarras (the pear-shaped Portuguese twelve-string guitar), one or two acoustic guitars, and sometimes a bass guitar. 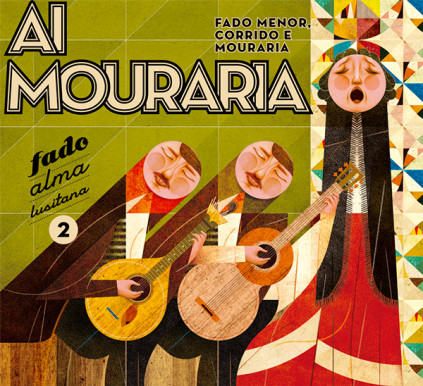 Now, back to Tasco do Jaime da Graça.

I had sprinted through my jam-packed day like a maniac to get there on time. I walked up and down the street, past the unassuming exterior several times, before realizing I had arrived. 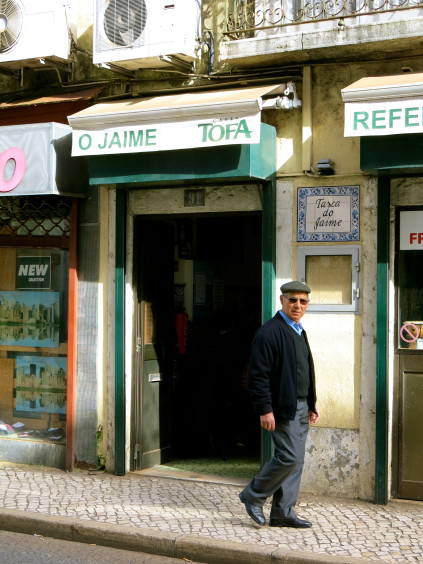 No one was there.

Except for a few flies buzzing around, an old woman seated at table at the back, and a man (presumably the owner) behind the bar, there was no sign of life, much less a fado performance. 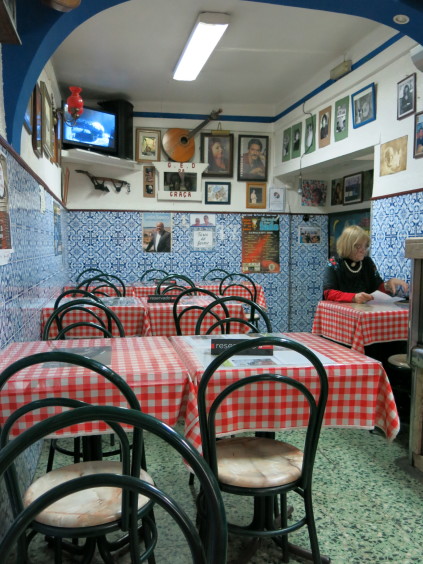 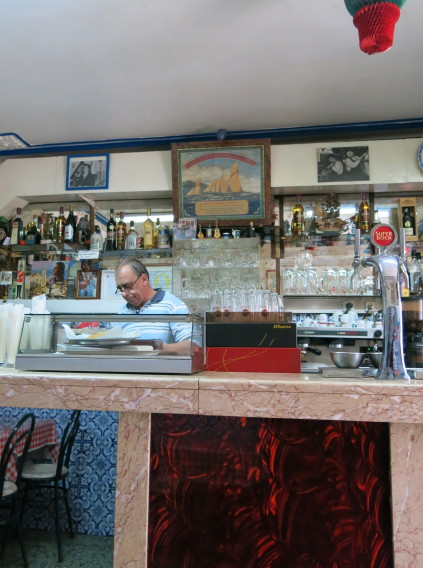 “Fado?” I asked the man, thankful that it’s a word that means the same both in English and Portuguese.

Assuming I had understood correctly, I figured the show would start at four o’clock.

It was three-thirty. I decided to wait, even though I felt awkward and completely out of place.

I sat down at a table and ordered a beer and the Portuguese version of tapas—a plate with slices of Iberian cured ham and pieces of cheese, served with toothpicks, and a basket of bread. 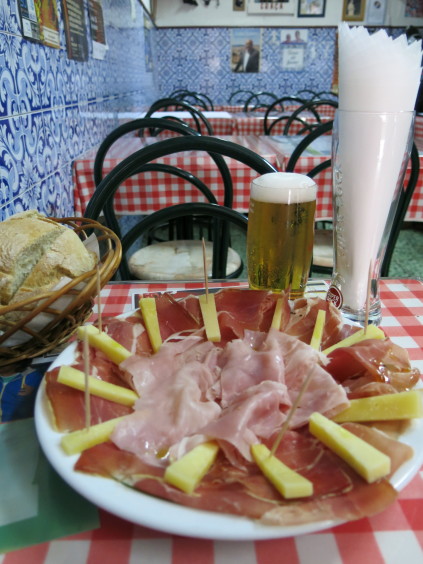 A light was shining on the portrait of the beloved fadista, Amàlia Rodrigues, the Queen of Fado. (She is so revered that when she died in 1999, the country honored her with three days of official mourning.) 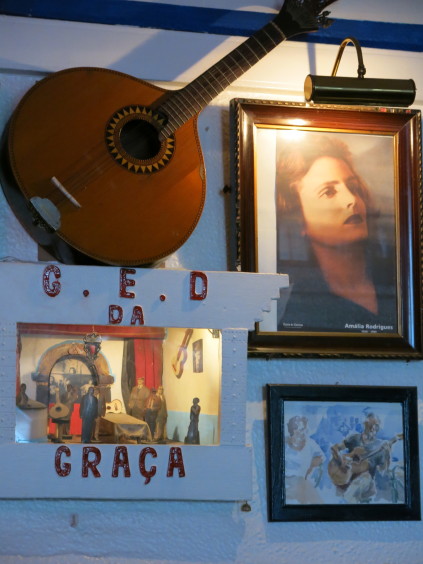 The posters and memorabilia on the walls indicated that the restaurant was, indeed, a venue for fado. 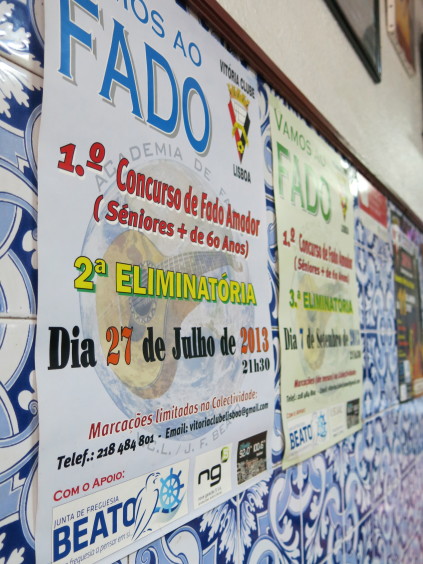 Even so, when four o’clock came and went, I started to wonder if I had misunderstood the man behind the bar, and if there actually would be a performance.

I looked outside to see that it had started to rain. The tram went by for the umpteenth time, but no one got off. 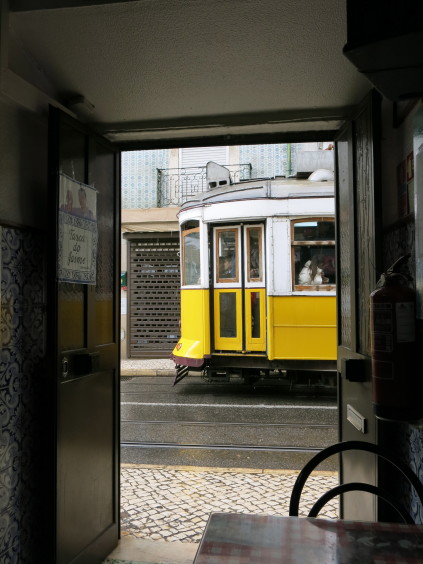 Finally, at around four-thirty, three guys trailed in, carrying guitar-shaped cases. (Two were of the Portuguese guitarra-shaped variety.)

Jovially, they greeted the man who I had correctly guessed was the owner and proceeded to set up chairs, unpack their instruments, and begin to “warm up.” 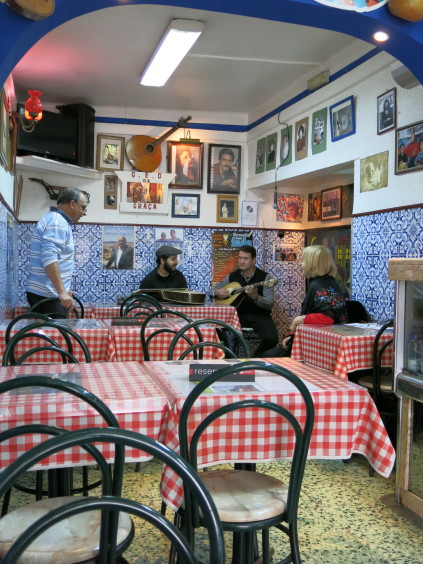 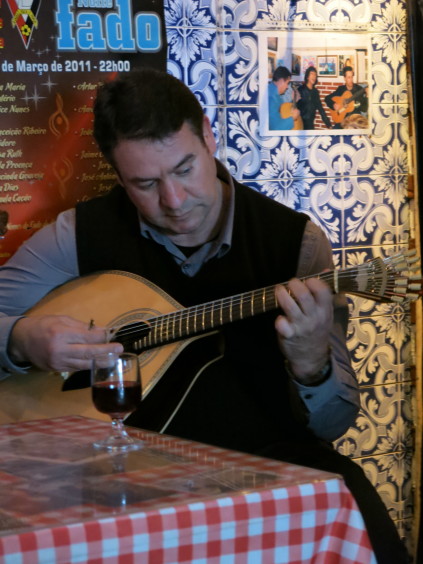 I had been taking pictures discreetly, but now that the musicians had arrived, I couldn’t resist the obvious photo ops.

When the old woman saw my camera, she gestured to me to come and photograph her. 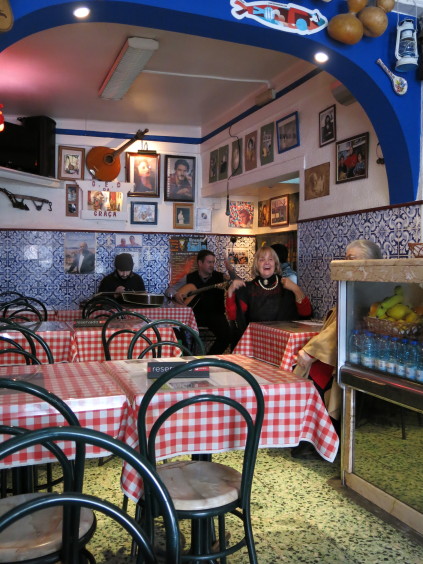 She stood up, smoothing out her embroidered shawl, and smiled widely for my photo. 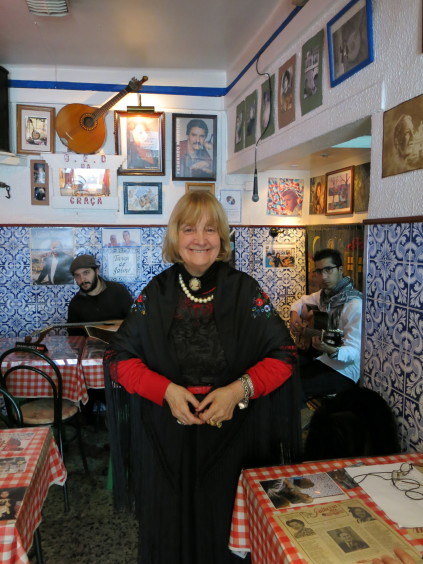 The owner went around the room putting “reservado” signs on the tables and turning on wall sconces so the fluorescent lights could be turned off to set the mood.

When he had finished the performance preparations, he stood and faced the musicians and then burst into song, closing his eyes and gesturing wildly—as one does when singing fado. 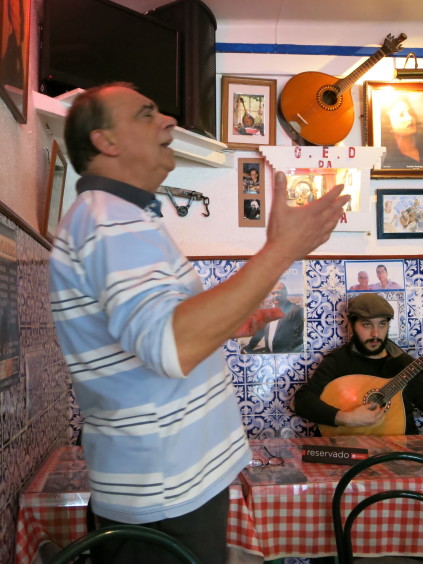 By five o’clock the place was packed—a man came in with his two little girls, followed by several couples, young and old, and, eventually so many people had squeezed in that some had to stand outside the door. 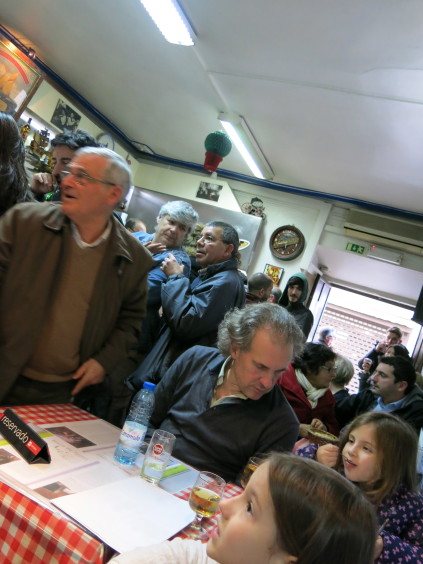 Plates of ham and cheese, and fish cakes shaped like footballs, were set down on tables, along with carafes of port wine and glasses of Portuguese Super Bock beer.

A couple named Otto and Brigitte, who were from Vienna, were seated at my table. They kindly shared their carafe of wine with me, and also spoke English, which was a bonus. The couple had spent a lot of time in Lisbon, and were regular patrons of Tasco do Jaime.

In fact, by the attention that was given to them, they were clearly honored guests of the owners—and I became so by association.

I got the scoop from them on the cast of characters, including the more well-known of the singers.

I took a picture of Joāo Soeiro, a popular fado singer—you can see his poster on the wall in the background. 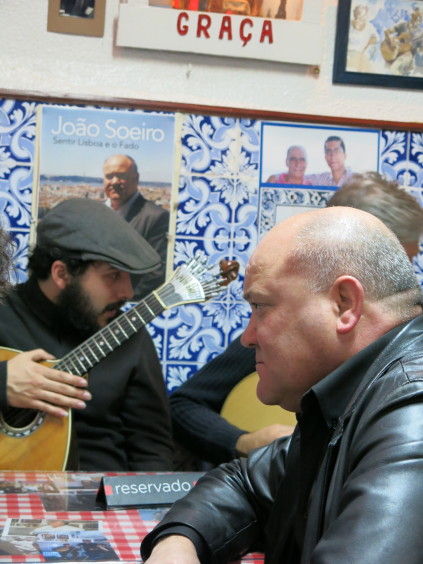 I learned that the young man with glasses playing the acoustic guitar was the son of the owner, and that his mother, the owner’s wife, was named Laura. She was an amiable and attentive hostess—double kissing each new patron that arrived, and passing out food and drink.

Everyone knew each other, and may or may not have been related. Whatever the case, they seemed like one big happy family.

When the singing began, the little restaurant was transformed. Voices rang out with emotion, as each singer stood up and sang their heart out.

The man with the two daughters sang. 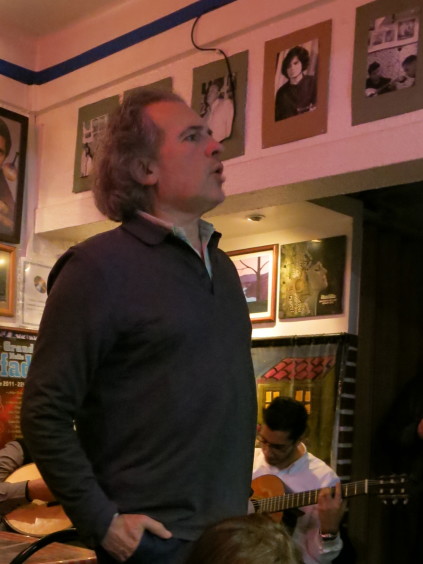 The old woman sang, with gusto. 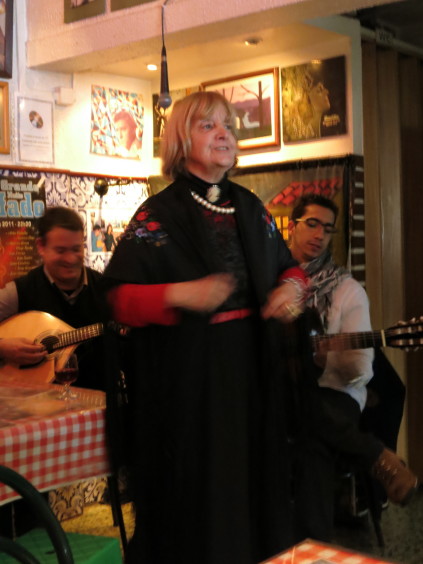 Two more guitarists showed up and joined the other three. 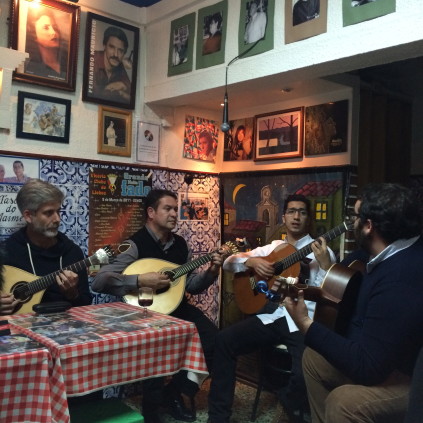 A woman named Ana sang, and took my breath away. Her first song was so filled with, well, saudade, that it brought tears to my eyes. It didn’t matter that I didn’t understand the words. The sentiment was crystal clear. 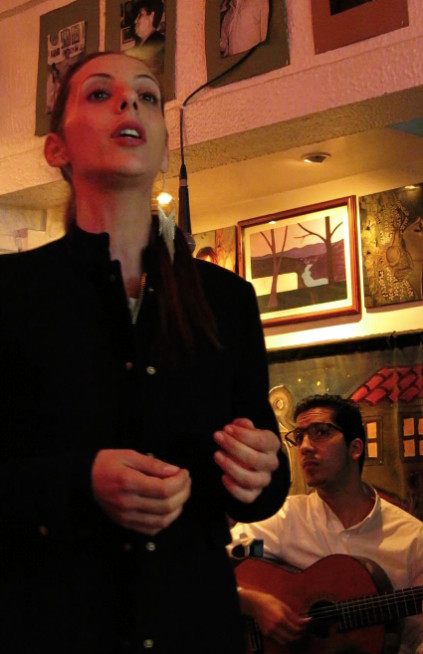 You can see a video that I took of her second song on my You Tube channel.

When she finished singing, the entire restaurant launched into a rousing Portuguese version of “Happy Birthday” as the owner brought out a plate holding a piece of cake with a flickering candle for her to blow out.

It got dark outside, and people came and went. If someone got up to leave, their chair would immediately be filled by a new patron, and more food and drink would appear. 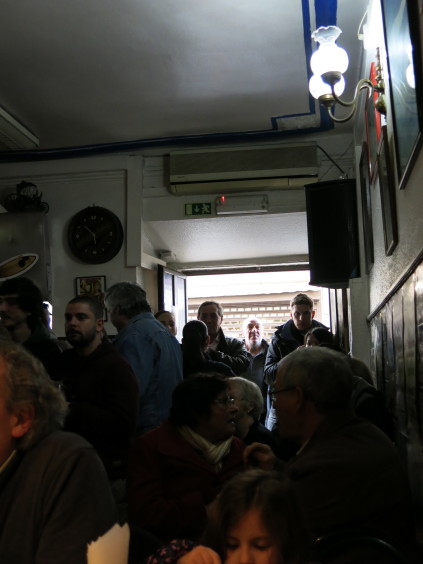 Whenever someone stood up to sing, a collective “shhhhh” would silence the lively crowd, allowing the soloist’s voice to fill the room with the music of fado. 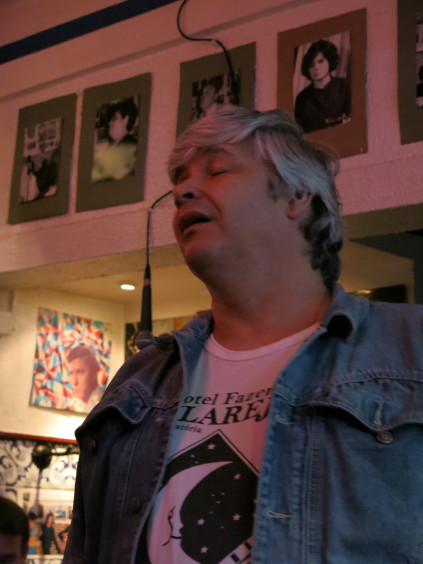 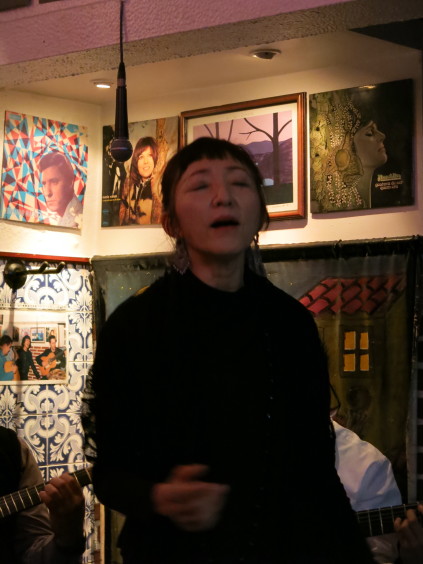 The restaurant eventually became so crowded that I asked if I should leave so someone else could sit down.

The response was a resounding, “NO! Stay, stay!”

Because, you see, I had become part of the family. Even though I didn’t even speak the same language.

And that, my friends, is why I travel—not only to see the sights, and taste the food, and hear the music—but to truly immerse myself in another culture.

There is nothing more exhilarating.

“Travel is like love, mostly because it’s a heightened state of awareness, in which we are mindful, receptive, undimmed by familiarity, and ready to be transformed.”
—Pico Iyer (b. 1957) British novelist