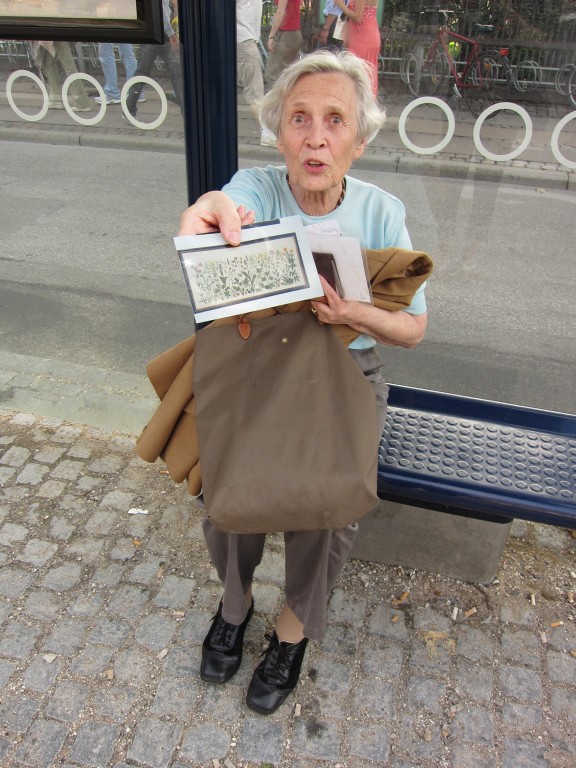 At the Hans Christian Andersen Boulevard bus stop in Copenhagen, I sat down next to an elderly woman to wait.  It was a long wait and, believe me when I tell you, she talked my ear off.  She went on and on and on and on.

Her name is Mrs. Arndt.  We looked at her vacation itinerary and she told me she was waiting for the bus to take her back to her hotel.  She told me about how she had broken her wrist falling on ice, and showed me where the bone still jutted out.

Without knowing that I had any interest in design, she pulled out a plastic envelope of snap shots of the needlework she had done.  She showed me pictures of the restaurant that uses her embroidered linens, and many pictures of needlework in frames.  I told her that I especially liked the group of framed trees, which is hanging in her dining room in the picture.  Her furniture is Danish modern, which she most likely bought when it was first made.

I took a picture of her, in which she insisted she hold up a photograph of her handiwork.  She kept talking even while I snapped the photo. (Picture at top.)

The thing is, she had been speaking to me the entire time in German.

I don’t speak a word of German.

*Title refers to the “Tower of Babel” story in the Book of Genesis about the origin of separate languages.

Tags: Copenhagen, Denmark
admin
https://justonesuitcase.com
There are 3 comments for this article