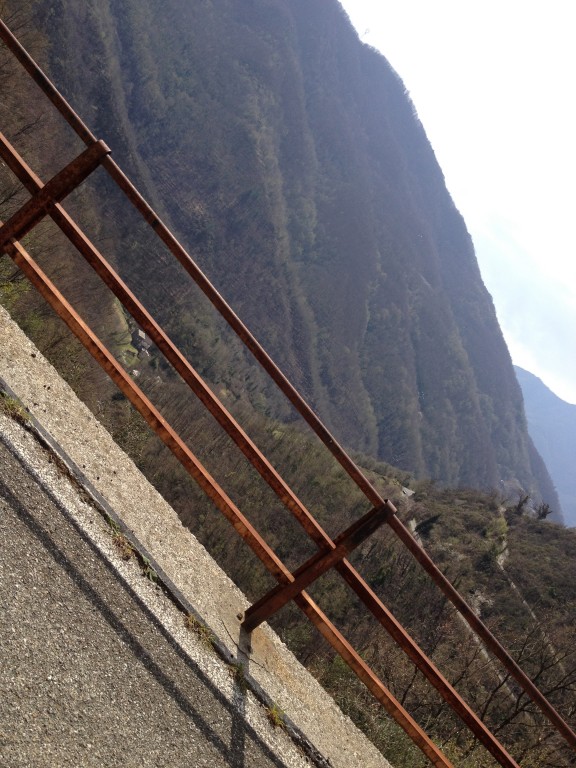 [damask |ˈdaməsk|
noun |
A figured woven fabric with a pattern visible on both sides, typically used for table linen and upholstery.]

Not exactly the kind of thing you’d risk your life for, right?

The adventure happened a few years ago, but when I went back to Italy in July and drove by the turn to Lorsica, I was reminded of my perilous quest. So here’s a repost of the story. (The photo above is a preview.)

I was scouting locations in the Liguria region of Italy that could be included in a home renovation television show I was art directing. I’d heard from a recent visit to a chair factory there was a damask factory in Lorsica. This region of Italy is historically known for its damask production, so it sounded like a great find. (This is the kind of thing I get excited about.)

For those of you that are scratching your heads wondering what damask is, here’s an example:

Looks familiar, right? It’s now made by machines, but it was originally woven by hand on large looms. Apparently Di Martini Damaschi, in Lorsica, was still weaving damask on a loom from the early 1900’s.

I programmed “Lorsica” into the map on my phone and off I went. If I had been looking at an actual map, I would have seen what I was getting into. Just look at these zigging and zagging roads, which, by the way, are on the side of a mountain.

Relying solely on my GPS, I headed blindly up the mountain.

It turned out to be a one lane, yes, zigging and zagging road with the imposing, craggy mountain on one side and a seemingly five thousand foot drop on the other. With little or no guard rail.

FYI, I stopped the car to take these pictures, just in case you’re wondering.

About every five minutes there was a falling rock sign, which, let’s face it, didn’t help the trepidation I was feeling driving up this mountain.

Wait a minute…why was there no one coming in the opposite direction?

I crawled up the mountain, trying to avoid looking at the drop on my right side. My rental car had this feature where it would “beep-beep-beep” if it got too close to something, which was great if you were backing up into a parking place.

In this case, it just kept beep-beep-beeping all the way up the mountain…because it was so close to the mountain itself.

Every once in awhile there was a makeshift fence along the road, and sometimes even a little guard rail. Somehow, not more comforting.

I finally reached the top and seemed to drive right past the village.

There was no way in.

I pulled over to the side of the road and parked.

I started walking up a path that looked like it might lead to some sort of village. I got to the top and kept wandering. It was like a ghost town. There was no one in sight. No shops, no bars, nothing.

I saw the church. Well, that’s something.

I looked down at the strange crypts alongside the mountain.

Then I saw laundry blowing in the wind. So there was one sign of life.

I walked back the way I had come, and this time I saw a door with a little “Di Martini Damaschi” sign. I knocked but no one answered.

Without really thinking about it, I pushed the door ajar. It opened against a ladder, in a tiny room with two large looms filling the space.

On one of the looms, damask was, indeed, being woven.

It was at that moment that I heard the dogs.

A hair-raising cacophony of snarling and barking sent goosebumps down my spine. There had to be at least five of them, and they were raging and ravenous. Maybe even rabid.

As I ran out the door, I noticed the “ATTENTI AL CANE” sign…beware of dog, or, in this case, dogs.

I ran back down the narrow lane.

I got to my car, still hearing the dogs howling in the distance.

It wasn’t until then that I thought about the fact that I had to drive BACK DOWN.

Tags: damask, fabric, I T A L Y, Liguria, Lorsica, travel
admin
https://justonesuitcase.com
There are 12 comments for this article