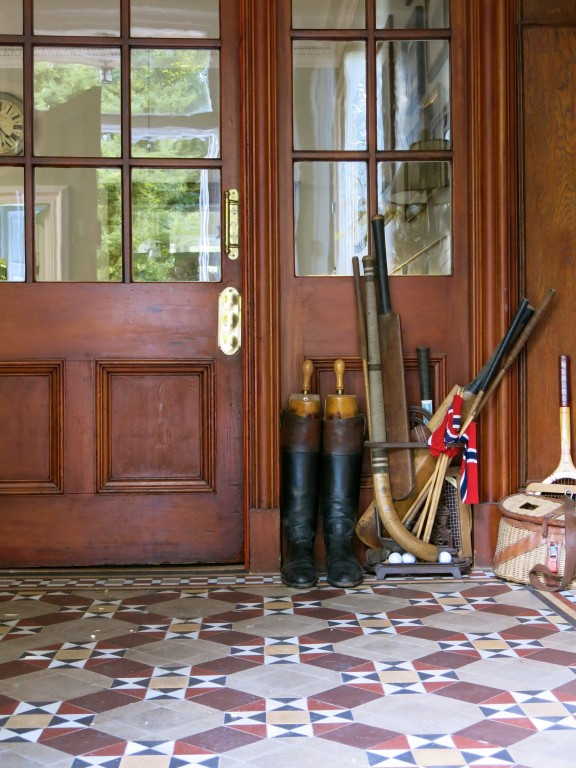 It took me four somewhat dicey hours to get to Kircudbright, Scotland, only to find there was, literally, nothing to do there.

Here’s the thing about travel: No trip is ever wasted.

Somewhere along the way, you’re bound to meet someone interesting, or see something intriguing, or find inspiration in an unexpected source.

When I arrived at Glenholme Country House, the bed and breakfast I had booked to stay in, I stepped into the tiled entryway and saw the riding boots, cricket bats, and bait basket arranged to perfection next to the door – and I knew this was going to be the pot of gold at the end of the proverbial rainbow.

In fact, I had found a “style moment” gold MINE.  I knew there was a reason I had gone to Kirkcudbright!

But first, let me tell you about the property and its owners.

The stately Victorian house was built in 1861 by a local solicitor, at a time when Kirkcudbright was a bustling port on a major train line.  Thanks to a thoughtful renovation by its current owners, the exterior still looks pretty much the same.

The proprietors of Glenholme Country House are Laurence and Jennifer Bristow-Smith, world travelers who have settled in the idyllic Scottish countryside outside of Kirkcudbright.

Jennifer studied art in Finland and Scotland, and was an artist and curator in Norway for twenty years before moving to Morocco, where she renovated and redesigned houses in Marrakech.  In addition to providing hospitality to her guests at Glenholme, Jennifer runs a successful online vintage textile business called Starched & Crumpled.  She scours flea markets in Europe for antique linens and lace and buttons and trim, and sells them to customers all over the world.

Laurence spent twenty-five years working for the Diplomatic Service in Morocco, China, Taiwan, Hong Kong, Norway and Italy, recently retiring from the post of Consul General in Milan. He is a business consultant, a writer, and a self-taught chef.  As the latter, he provides guests with internationally-inspired cuisine.

The experience and imagination of the fascinating couple is evident in the attention to detail everywhere.

In the front hall, straw hats hang above an ancient carved bench, and antique photos are framed above a shelf of vintage children’s books.

Just inside the house, there’s a wall filled with framed team photographs from a bygone era.

Everywhere I looked were STYLE MOMENTS.

Jennifer’s creativity wasn’t just limited to arranging items artistically – in a hallway, she had glued large maps onto the walls, using wallpaper paste.

In the dining room, Jennifer adhered lengths of vintage homespun linen to the wall, on which she mounted a diverse array of antique sconces.

Dried flowers were arranged in a bowl on the massive, linen-covered dining room table, and under bell jars on a sideboard.

The paintings on the dining room walls are by the Bristow-Smith’s friend, artist Alan Rankle. They are traditional landscapes, resembling the work of 19th century British artists Turner and Constable – and then, by obliterating sections of the painting with broad strokes and dripping paint, Rankle has transformed them into contemporary works.  I loved the deep colors, and the juxtaposition of old and new styles.

The sitting room was lined with floor to ceiling shelves filled with colorful books. Pendant lights were suspended over the coffee table, hanging just above its surface, on which sits a glass bowl of flowering branches from the garden.

Vintage dress forms stood in a corner like life-size sculptures.

A pewter compote on a pine table in front of the window held an assortment of metal objects.

The most intriguing design detail in the sitting room was above the fireplace.  Jennifer had glued pages of an old book onto the wall, and added a touch of whimsy by pinning up a pair of antique spectacles on one side.  On the mantle shelf, antiquated leather-bound books, tied together with twine, flank a heavy glass vessel filled with oranges, which provide the perfect pop of color.

There were even style moments in the kitchen.  In the back hall, bunches of herbs were artfully hung to dry on a rod.  Inside the kitchen, above the stove, more herbs were tied onto a found object hanging on an iron hook above Laurence’s tidy row of spices.

A large wooden bowl on the counter was filled to the brim with oranges, and a pair of avocados.

The kitchen table was in a cozy nook, benches topped with ticking cushions and lots of homespun pillows.  Vintage wooden cutting boards hung on the walls, and shelves above the wainscoting were jam-packed with books.

On the wall above were the original bells for the house – from a time when it was filled with servants whose job it was to attend to the “upstairs” family.

Upstairs, the four guest rooms are named after two lords, an ambassador, and a prime minister.  I was given the Curzon room, after Lord Curzon, 19th century Viceroy of India.

The four-poster bed was covered in a vintage French quilt in an “empire red” print, and the accessories had been carefully chosen to harmonize with the color scheme.

When I saw how she had color-coordinated the books in the room, I told Jennifer about how my “Decorating with Books” piece on Huffington Post had amassed such controversy from readers – what would the naysayers think of THIS?  (I thought it was wonderful.)

The bay window looked out over Glenholme’s formal gardens, the chestnut trees that lined the drive, and the verdant meadows of the River Dee beyond.

There were even style moments outside.

Sun streamed through the hedges in the garden, bees buzzed among the flowers, and red berries stood among feathery white fronds.

If you think you’ve seen it all, just wait.

Jennifer’s collection of vintage linens and quilts, and bits and baubs, filled a room that held the mother lode of all style moments.

Lest you think my stay was completely serious, and crazy-free, I must tell you about my fellow guests.  There were only two other guests staying at Glenholme – an elderly woman and her adult daughter, who were in the area for the book festival in nearby Wigtown, which is known as “The Book Town.”  (Kirkcudbright being “The Artists’ Town.”)

We had tea together in the sitting room, and I listened as the incredibly earnest daughter (a scientist who is literally developing a cure for cancer) and her quirky mother discussed the controversy in Scotland over the badger population that is being killed off because they are infecting livestock with tuberculosis.  The daughter was outraged, and spoke out in defense of the badger murder protests.  I almost laughed out loud when the mother said, under her breath, “It seems to me we could spare a few badgers…they’re just badgers, after all.”  The daughter was not amused.

When they started talking about a book written by a woman who had a house full of crows living with her, I excused myself.

The next morning, I joined them for breakfast – tea in a silver pot, and a “full Scottish breakfast” cooked by Laurence.

Then mother and daughter set off for Wigtown (to hear the crow woman speak), and I left to drive to Glasgow, a day earlier than I had planned.

Tags: hotel, Kirkcudbright, Scotland
admin
https://justonesuitcase.com
There are 4 comments for this article