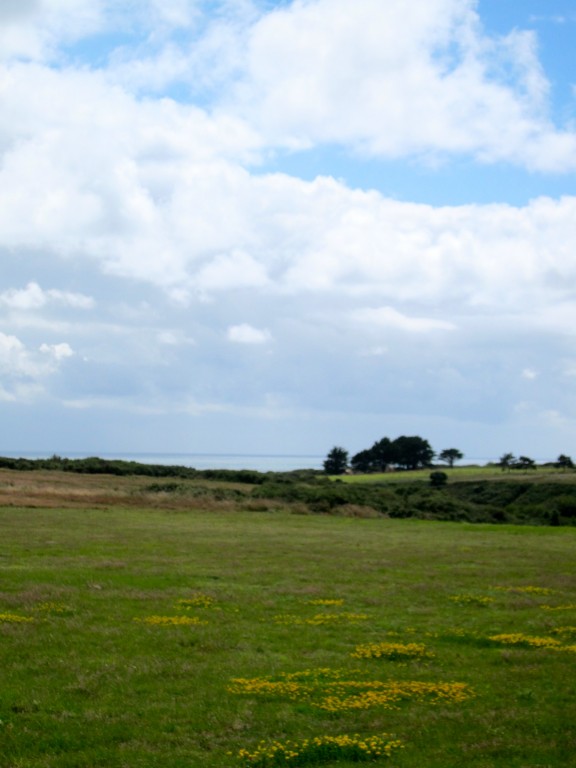 It started out as an interesting excursion…a visit to the studio of an artist who makes tiny ships out of mussel shells.  It turned out to be yet another unanticipated adventure.

I had been taking the island bus everywhere on Belle Île en Mer, but I took a taxi to the studio of Jean Guilliaume in Borlagadec, because it was not close to any of the bus stop locations. I asked the taxi driver if he could pick me up to take me to the next village after my visit, but he was going to charge me 20 euros for the short trip.  Could I walk?  He said, “It’s about a kilmometer and a half away.”  I could do that.

The studio was in a little cottage with a charming garden.

Jean showed me how he makes tiny ships using mussel shells, bits of wood, twigs, wire, string, and tiny brass watch parts.  Each ship is a replica of an actual vessel found in antique photographs.  The detail is meticulous.  When they are finished, they are mounted in glass shadowboxes, and cost from 400 – 1000 euros.  (No I didn’t buy one…I had to be satisified with a photograph.)

My next stop was going to be a village called Bangor, where I wanted to take pictures of the pretty houses, and where I could catch a bus back to La Palais, and my hotel. The taxi driver had said it was about a kilometer and a half, but I thought it wouldn’t hurt to confirm…Jean nodded, and pointed down the road and said (in French), “oui, a kilometer and a half, easy walk.” I was a little daunted by the long stretch of road ahead, but I saw some houses in the distance that looked like they might be a kilometer and a half away, so off I went.

I passed cylindrical bales of hay that reminded me of Van Gogh’s painting, and could see the ocean in the distance.  I kept walking towards the houses up ahead.

I finally reached the edge of the row of houses.  The sign said, “Kervarigeon.”

It was not Bangor.

I asked a couple of construction workers where Bangor was, and how far, (now I didn’t trust the taxi driver OR Jean) and they pointed down the road and said, “a kilometer and a half.”

Okay, that would be in addition to the kilometer and a half I just walked.  Deep breath.

After Kervarigeon the road stretched ahead, seemingly endlessly.

I passed wheat fields.  It’s so peculiar to me that there’s farmland in the immediate vicinity of rocky cliffs and wide open sea.

I passed some chickens and a line of tea towels blowing in the wind.  And I kept walking.

And walking.  Thank god I had comfortable shoes on.

Passed some horses.  Was happy to see signs of life.  Kept walking.

Passed some sheep and said hello.  As I heard my voice speak aloud, it occurred to me that I hadn’t heard, or spoken, an English word for three days.  Total French immersion.

Passed some pretty flowers.  Starting to talk to myself.  Not a good sign.

And I walked.  You will notice that the blue sky is gone.  The wind picked up and the sky clouded over.  And I kept walking.

Then, you guessed it, it started to rain.  The weather has presented itself in extremes…one minute sunny and hot, the next minute rainy and cold.  I’m constantly putting my raincoat on and taking it off again.

“It couldn’t be too much farther,” I told myself, even though there hasn’t been any sign of life since the sheep, and none up ahead.

This cross appeared out of nowhere…it was probably a monument to someone who tried to walk to Bangor and never made it.

I passed a sign meant for bikers, and was reassured that I was going in the right direction.  Small consolation, but something.

Still walking.  This had to be more than three kilometers.  I wish I had a pedometer.

I went by a row of blackberry bushes and took note, just in case I never found Bangor and needed sustenance.

Suddenly, as I rounded a curve, I saw a house.  Could it be?

Ironically, I reached Bangor and then couldn’t figure out how to get to the town center.  I walked in circles, turning down this street and that…

…until I finally found the pretty houses I had come to photograph.

I saw all pretty houses, and photographed them, in less than five minutes.

Time to get the bus!

I found the bus stop and, with great anticipation, looked at the schedule…

The next bus wasn’t coming for an hour.

No problem, I’ll just walk around the town again to be sure I haven’t missed anything.

Three minutes later: Okay, that’s pretty much all of it.  Only 57 minutes left to wait.  Deep breath.  Again.

Then I heard voices and looked up to see a group of men playing boules.  People!

I watched for awhile, and then asked if I could photograph them.  They were more than happy to oblige.

At that point I just had to join in…checking out the distance from each ball to the orange target ball, and cheering for the player with the closest one.  I even tried my hand at it.  My first throw was a disaster…overshot the target.  With the second shot, I did pretty well, even knocked out another player’s ball.  (I’m pretty sure they were impressed.)

The sun even came out.

Before I lost track of time, I said my goodbyes and headed back to the bus stop.  I know you’re probably going to think I missed the bus and had to walk back to the hotel…

Tags: Belle-Île-en-Mer, Brittany, France
admin
https://justonesuitcase.com
There are 4 comments for this article