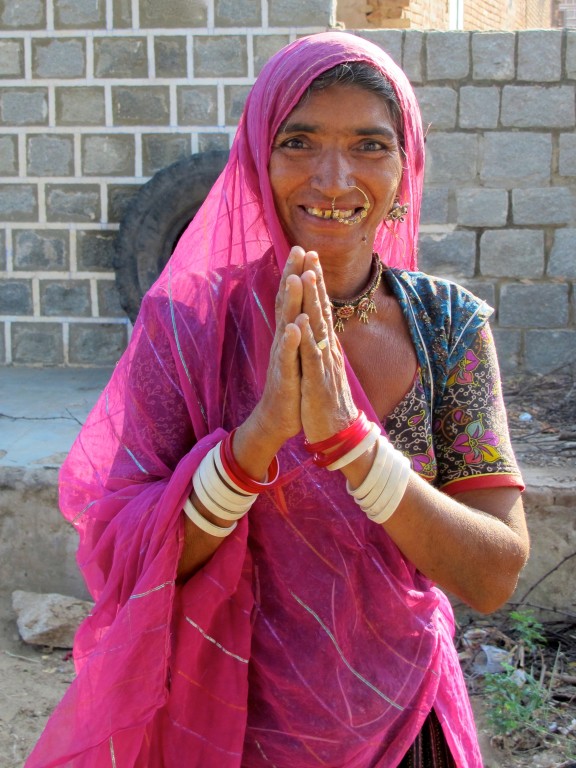 Wherever I am in the world, I am inspired by the beauty and color and character of unfamiliar cultures – the architecture, the landscape, the artifacts, and, perhaps most meaningful, the people.

I have also found that my feeble attempts to speak even a few words of the language are usually rewarded with a smile (okay, it’s sometimes a laugh at my bad pronunciation) and an open door into new worlds.

In India, the simple greeting of “namasté” transformed faces from wary to welcoming.

The traditional Indian hello of “Namasté,” delivered with palms together in front of the heart and a small bow, means literally, “I bow to you.” In deeper terms, it means, “The God in me greets the God in you; the Spirit in me meets the same Spirit in you.” It is as heartfelt to deliver as it is to receive.

Walking through the streets of Narlai, I found that the villagers were happy to engage, and even to pose for my camera, in response to my “namasté.”

The children would strike a pose, and then giggle delightedly and beam with pride when I showed them the image on my camera.

Even though we exchanged just a word, or maybe two, it gave me a chance to stop and look into the faces of the people in this village…

…and, for a brief moment, to connect.

Tags: India, Narlai
admin
https://justonesuitcase.com
There are 9 comments for this article