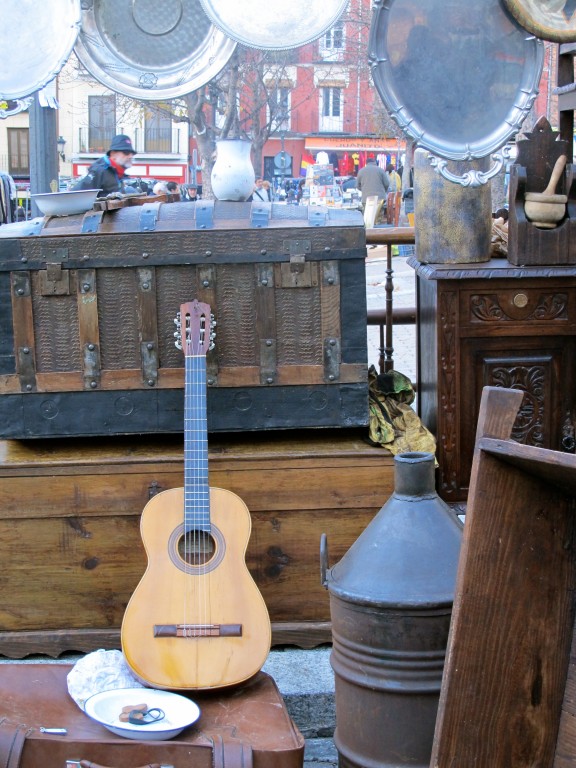 On a Sunday in Madrid, there’s only one place to be.

Since the 15th century, the El Rastro neighborhood has been famous for the trade of second hand items. The market starts at 9, and by 11 the streets are teeming with people.

I started at the Plaza General Vera del Rey. Vendors have their goods set up in the plaza on various surfaces, including the ground.

I’m always amused by the objects that end up together unintentionally – like this nun figurine next to a box of Hollywood star trading cards. . .

. . . and the bright blue toy car that somehow landed with the rusted antique tools.

Then there’s always the oddball finds whose stories I would love to know.

Baby Jesus—playing with his foot?

How did this 1902 photograph of a little girl holding rabbits in Bennington, Vermont find its way to Madrid?

This scary brass cat holding shot glasses in its bow could only have come out of the home of an eccentric individual.

The cobbled lanes leading off the plaza, are lined with more antique vendors, as well as jam-packed stores.

The narrow streets became more and more crowded as the day progressed.

A trio of horn players, who called themselves the “Sex Pistons,” kept the masses entertained.

A comic book vendor picked up his guitar and sang a song for me.

I wondered what this group was examining in the street.

A man had picked a ring out of a collection of odds and ends – plastic toys, stray electronic chargers, cheap watches, and random trinkets. Had he really found something of value in this assemblage?

On another street, a woman dug for treasure in this intimidating pile.

If you’re like me, the time passes quickly. Suddenly the day is done and the crowds disburse, carrying their flea market finds in hand.

I wasn’t finished yet, though—I met an enterprising antique dealer who brought me to his Aladdin’s cave of a warehouse filled with treasures…but that’s another story.