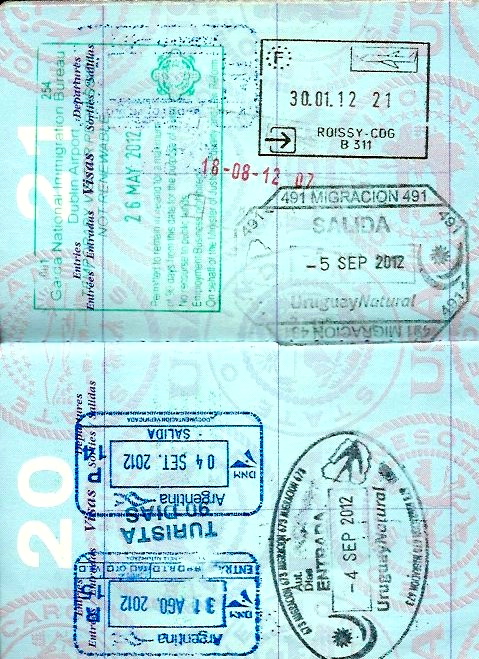 My passport is full.

Each of the stamps on those little blue pages represents an encounter, an adventure, an education, an accomplishment, a story.

I had to go to the passport office to have new pages inserted, and as I sat there waiting, I flipped through, and remembered.

These are some of my favorite photos from my travels, in no particular order.

No matter how many times I’ve seen the Eiffel Tower (hundreds?), I still find it awe-inspiring.  This was a cold January day, and, even though I was seeing it with my own eyes, I was astonished by the quality of light in the photograph.

Venice is one of my favorite places in the world, and I have dozens of photographs of the canals, but I like this best…the rosy pink glass lanterns, with the ornate arms of the lamp post silhouetted against the sky.

At the top of the Spanish Steps in Rome, a beggar woman kneels in supplication.  A moving photograph that I keep going back to look at.

I’m not sure what this parade was for in Cortona, Italy, but the locals were quite serious about it, and I love this photograph.

A blanket of fog rolled in through the Tuscan valley below Cortona…just after I took this photo, the town was enveloped.

I will never forget this breathtaking view out the window of my cottage in the mountains of Tuscany, and the peal of the church bells marking every hour of every perfect day.

I know it’s just butter, but oh, how I love this packaging.  The photo was taken at the kitchen table of my Tuscan cottage.

Be it a label or a hand-painted sign, graphics always catch my eye.  This sign for ice was painted on a building in Uruguay.

I was only in Colonia del Sacramento, Uruguay for one day, but experienced a wealth of slice-of-life moments, among them this cat, reclining on someone’s sweater, in a window…

…and a bright orange Volkswagen Beetle under the palm trees in the Plaza Mayor 25 de Mayo.

I took this photograph from the back of a cab, as we drove into Buenos Aires. It’s the Ministry of Health Building, adorned with a ten story steel image of Evita’s defiant face. (On the other side she is smiling, facing the area where, in 1951, a crowd of two-million people rallied for her to be vice president.)

A highlight of my trip to South America was a memorable visit to an Argentinian estancia, in the wake of a rainstorm that had flooded the road.  This was the hero on a tractor who pulled the car I was in through the river that had previously been a road.

At the estancia, a polo horse is silhouetted against the misty Argentinian sky.

I sat down on a bench to take off the boots I’d borrowed.  As I stepped away, I turned around and this was what I saw.  I love the colors in this photo.

After a gray and rainy day at La Bamba de Areco Estancia, this was what I awoke to the next morning.  Stunning.

Sunlight also creates the essence of this picture in a church in Bruges, Belgium, as the light shining through the stained glass is reflected onto the stone floor.

The town of Inistioge, Ireland, was so idyllic that, at first glance, I thought this white horse might be a unicorn.  The laughing boy splashing in the river added even more charm to the magical moment.

Then there’s India, a country of extremes…I marveled at extraordinary beauty, and despaired at life’s greatest horrors. It’s almost impossible to narrow down my favorite photographs from this trip.

This was the guide that led a group of us to the top of an enormous granite peak, above the 15th century village of Narlai.  The setting is said to have mystical powers…I couldn’t help but believe in its potential as I looked out on the staggering panorama of Rajasthan.

I call this my “slumdog millionaire” picture, because the young boy in the market of Jodhpur reminded me of the boys in the movie.

Strangely, I don’t recall the exact moment I took this photograph on a road in Rajasthan…and it is one of my favorite photos of all time.

I have no words for the following photos.  The faces speak for themselves.

I wondered what this woman, resplendent in her bright orange sari, was thinking as she gazed at the great monument to love.

With difficulty, I end the India photo journey here.

Barcelona architect, Antoni Gaudí, was inspired by the sea when he designed Casa Batlló in 1904.  My photo of this undulating staircase is an illustration of his unique and inspiring artistry.

Sometimes the characters I meet in flea markets are as fascinating as the objects for sale. The Barcelona flea market was chaotic and haphazard, vendors selling odds and ends with little to no value…the value was in meeting people like this eccentric bearded man.

This woman in the Budapest flea market may look innocent, but she was a shark, insistent that I buy something from her.  (I didn’t need to understand Hungarian to know what she wanted.)

Also in Budapest, this was one of those rare moments that are so wacky, you can’t even believe you’re seeing it…a quirky couple having their wedding pictures taken, weirdly posed several feet apart and in front of a car, with a homeless man in a wheelchair looking on.

This photo of a wedding party in Prague is so full of joyfulness, it’s almost palpable.

Over the years, I’ve taken countless pictures in the Marché aux Puces St-Ouen de Clignancourt, a.k.a. the Paris flea market.  Here’s two of my favorites.

One of my favorite Paris venues is the Jardin du Luxembourg.  On this sunny morning, a group of people were practicing t’ai chi among the trees.

In the Bordeaux region of France, the landscape consists of miles and miles of vineyards…grapevines in meticulous rows, punctuated by grand stone châteaux.

Near Bordeaux is the town of Saint-Émilion, where Medieval stone houses look like they are out of a bygone storybook.

The last two photos are from the best job I ever had…art directing the renovation of an old house in the mountains of Liguria, Italy.

The first is a photo taken in the house before the renovation.  The previous owner’s hat still hung on the art deco hat rack, even though the house had been empty for at least thirty years.

An elderly neighbor gave me this single white hydrangea blossom.  I love the quality of light in this photo, and will always remember the moment I took it…guests were arriving for dinner, and to see the finished house in all its glory.

My last trip of 2012 was to Iceland, where I spent Christmas morning swimming in the geothermal heated Blue Lagoon…in 19˚ weather.  Glorious.

There’s so many places in the world that I still want to see.

Wherever I go, my camera will be in hand…and I’ll continue to share the people, the architecture, the landscapes, and the objects that I capture through my lens.