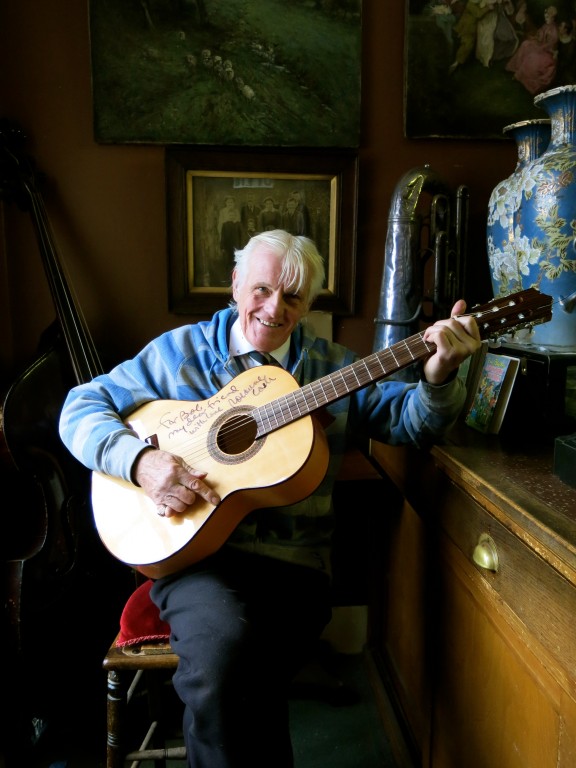 This is Bob Beveridge, in his secondhand violin / collectible shop in Falkland, Scotland. He is playing the prized guitar that was given to him by Roseanne Cash, when she and her famous father traced their roots back to this small village in the Kingdom of Fife.

At the risk of missing my bus back to Edinburgh, I listened to the story of how he had become fast friends with the Cash family, and about the history of some of the fascinating objects in his shop.

Then I snapped the photograph – and it’s one of my favorite photographs to date.

That’s not the end of the story, though.  When I got home, and sat down to write a post about the charming village of Falkland, I went online to find a link to add for the Johnny Cash story.  I found it, but I also discovered that Bob Beveridge is not just a secondhand violin shop owner, he was a retired Glasgow police officer whose name is associated with a couple of intriguing stories.

In 1971, Mr. Beveridge was the detective on the “unsolved mystery case” of an unidentified toddler that had been found dead on the banks of the River Tay in Tayport, Scotland.  A documentary about the case was televised in the UK in 2005.

Then I found a newspaper story from 2011, about “a plucky pensioner who carried an unexploded German World War II bomb for half a mile – to make sure it wouldn’t harm a child.”  Bob Beveridge was apparently walking his dog on a hill near Falkland when he saw a bomb sticking out of the ground. He gingerly carried it for half a mile to a safe spot, and called the police – who wouldn’t go near it!  (They called in military experts to defuse it.)

Learning about Bob Beveridge reminded me of one of the most rewarding facets of traveling the world – the people that I meet.  I realized that I no longer wanted to write this post about the “bonny village of Falkland” (although I will write that one at a later date), but, instead, to share photographs of some of the diverse individuals in the world with whom I’ve crossed paths.

With many I have shared a greeting, or a conversation (sometimes even in spite of the fact that we didn’t speak the same language), and others I photographed unaware. . .

I came across this woman at the top of the Spanish Steps in Rome, and photographed her after dropping coins into her cup.

Across Rome, near the Piazza Navone, a father and two sons drank from an ancient fountain.

In a hamlet in northern Italy, where I was designing the renovation of a stone villa, the neighbor, Marcello, would peek out of his shutter each time we passed by.

This old man in Buenos Aires was in good spirits as he sold hot maté, poured from thermoses on his cart.  (He gave me a cup for free.)

A soldier looks down from Evita’s famous balcony of La Casa Rosada.

When I saw this family of three generations sitting in the doorway near the Feria San Telmo, I asked to photograph them – and they answered with these smiles.

I saw several dog walkers in Buenos Aires, but no one with as many customers as this woman.

One of my top ten travel experiences was my trip to an estancia in San Antonio de Areco, Argentina – starting with the adventure of getting there on a road that was completely flooded.  This was the young gaucho who came to my rescue.

From one hemisphere to another – this young couple posed for me at (guess what) a sweater store in Reykjavik, Iceland.

In Paris, my lovely friend, Anne-France Bergonnier, is an antique dealer at Marché Vernaison in the Paris flea market.  This was a freezing January day.

I spotted this little princess on a sunny day in the Jardin du Luxembourg, one of my favorite places in Paris.

This friendly gentleman is the proprietor of a tiny antique shop in Prague.

On a chilly winter day in Madrid, an elderly woman sat looking out of the doorway of her antique store.

And then there’s India.  It’s so difficult to narrow down the photos of these captivating people, but here’s some of my favorites.

Last, but not least, are Martin and Derek in Scotland.  They were driving by when they saw me with my camera – and asked me to photograph them.